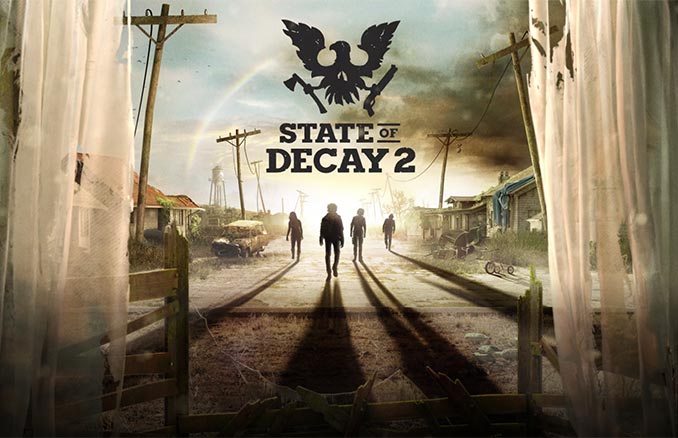 If you like zombies and exploring open worlds, you’ll want to check out the State of Decay 2 Gameplay Trailer and then read below on how to pre-order the game and get four days of early access. State of Decay 2 is the follow-up to the 2015 original and promises more tense and unpredictable gameplay in an open-world survival setting.

18 months after the zombie apocalypse, a lone woman joins a community learns what it takes to survive. In a world of choice and consequence, how will you survive? When the dead rise, every decision matters. Build a community. Make life-or-death decisions. Define what it means to survive.

The dead have risen and civilization has fallen. Not even the military could stop the zombies, and now it’s up to you to gather survivors and build a community in a post-apocalyptic world – a world where every decision matters, and where you define what it means to survive.

State of Decay 2 is the ultimate zombie survival game in an open world where you and up to three friends build a community of survivors. It’s up to you to establish a base, develop your characters’ abilities, and manage resources to survive as a group in a world where choices matter and every decision has lasting consequences. 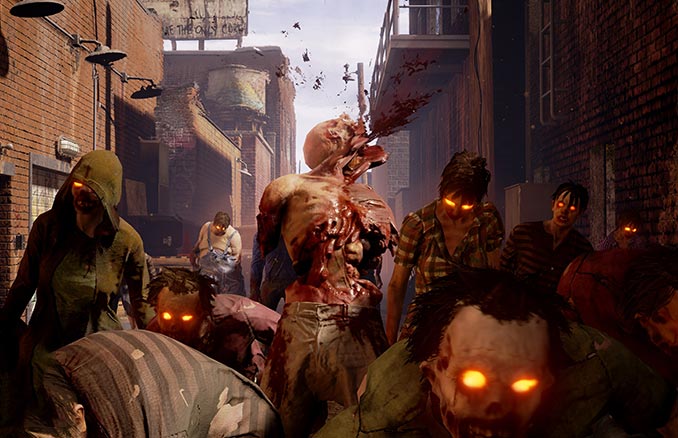 Every player’s experience is unique – as you play, the open world responds to your decisions, developing in real time and dynamically offering new opportunities for you to demonstrate your own personal survival priorities. These decisions also result in real consequences that affect your community. Send your best scavenger across the map to gather medicine for a sick friend… but know that they might not make it home. Help your neighbors, and you might make new allies… or you could decide that you need their food supply more than they do. In the end, how you survive might surprise you.

State of Decay 2 is exclusively for Xbox One and Windows PCs and has a May 22, 2018 release date. However, if you pre-order the right versions, you get the game 4 days early on May 18.

The biggest fans will want the most exclusive edition, which is the State of Decay 2 Collectibles Kit available from Best Buy. It costs $79.99, features collectible SteelBook packaging, and comes with early access. (Pre-order now to get it by May 18.) The Collector’s Kit includes a latex zombie mask for role-play fun, as well as a human brain SteelBook stand, a chopped zombie finger 4GB USB stick, a downloadable soundtrack, and an exclusive iron-on patch. 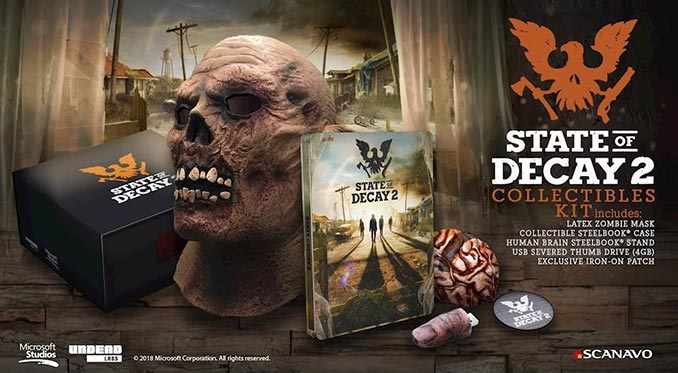 State of Decay 2 Ultimate Edition also comes with the early access. It costs $49.99 and you can pre-order from Best Buy or Microsoft. It includes the original game (State of Decay: Year One Survival Edition), as well as two add-on content packs for this game: Independence Pack and Daybreak Pack. With the Independence Pack you get patriotic new ways to mow down zombies, so you can celebrate independence with new vehicles, weapons, and gear. The Daybreak Pack features an all-new game mode that allows you to take the fight to the zombies on a new map with new siege facilities, missions and a variety of events including the challenging new “Horde” mode.

The least expensive option for State of Decay 2 is that standard version. You don’t get early access, but if you pre-order it you still get the Survival Pack Preorder Bonus, which includes the Skullsplitter melee weapon, an exclusive vehicle, and an assortment of necessary survival supplies and abilities. You can get State of Decay 2 for $29.99 at Best Buy and Microsoft.

Zombies are invading computer games, comic books, television shows, movie theaters near you, and maybe they’ll soon invade your front lawn. But don’t fret or worry; instead, come prepared by getting one of these Zombie Survival Kits! (I hope we don’t get invaded by the […]