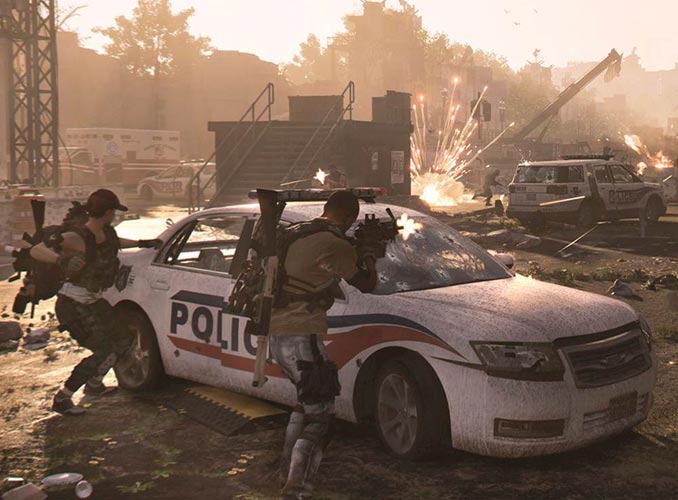 At Gamescom 2018, Ubisoft unveiled this Tom Clancy’s The Division 2: Gameplay Trailer. For some reason, they call it a “gameplay” trailer, even though it is much more of a cinematic trailer. Apparently, it is using some gameplay footage with narrative added over it. Either way, it doesn’t matter, because there is plenty of real gameplay to see if you look at the different videos included in this article.

Tom Clancy’s The Division 2 will be released on March 15, 2019, for the Xbox One, PlayStation 4, and PC. Pre-order now from Best Buy and get it by release along with an exclusive $10 bonus reward. By pre-ordering now you can access the private beta and you also get the Capitol Defender Pack, which includes the Lullaby – Exotic SPAS-12 Shotgun and Hazmat 2.0 Outfit.

When everything is at stake, will you stand up as Washington D.C.’s last line of defense? Watch the official Gamescom 2018 gameplay trailer for Tom Clancy’s The Division 2, and pre-order now to get access to the Private Beta.

Tom Clancy’s The Division 2 is a shooter RPG with campaign, co-op, and PvP modes that offers more variety in missions and challenges, new progression systems with unique twists and surprises, and fresh innovations that offer new ways to play.

In the campaign, you take on The Division’s most critical mission yet as you tackle unprecedented dangers as you pull D.C. back from the brink. Join your friends to take on the game’s toughest missions in co-op. You’ll need all the help you can get. Sometimes even fellow agents can’t be trusted. Take on other players in PvP and prove your combat proficiency.

The above Gamescom 2018 isn’t the first gameplay trailer for The Division 2, Ubisoft showed this one at E3 2018:

The fate of the free world is on the line. Watch the all-new gameplay trailer for Tom Clancy’s The Division 2.

If that isn’t enough gameplay footage for you, check out the Tom Clancy’s The Division 2: Gameplay Walkthrough Trailer:

Time to team up and save D.C. Watch the first-ever gameplay walkthrough for Tom Clancy’s The Division 2.

After the crisis, everything changed. Welcome to Tom Clancy’s The Division 2, available March 15, 2019.

Seven months have passed since a deadly virus hit New York City and the rest of the world, crippling the population. When the virus hit, The Division, a unit of civilian sleeper agents, was activated as the last line of defense. Since then, Division agents have been fighting relentlessly to save what remains.

For The Division, the stakes are higher than ever. Washington, D.C. – the most heavily protected city on earth – is at risk, leaving the entire nation on the brink of collapse. If Washington, D.C., is lost, then the nation falls. As a Division agent who has been in the field for seven months, you and your team are the last hope to stop the fall of society after the pandemic collapse.

Developed by Ubisoft Massive and the same teams that brought you Tom Clancy’s The Division®, Tom Clancy’s The Division® 2 is an online open world, action shooter RPG experience set in a collapsing and fractured Washington, D.C. This rich new setting combines a wide variety of beautiful, iconic, and realistic environments where the player will experience the series’ trademark for authenticity in world building, rich RPG systems, and fast-paced action like never before. Play solo or co-op with a team of up to four players to complete a wide range of activities, from the main campaign and adversarial PvP matches to the Dark Zone – where anything can happen.

For even more of the cinematic story behind the game, watch this Tom Clancy’s The Division 2: Washington D.C. Aftermath Trailer:

How do you save a nation when its enemies come from within? Introducing Tom Clancy’s The Division 2.

When you drink with this RPG Drinking Stats Pint Glass 4-Pack, just be aware that your stats are going to change. Each glass gives you different stats. When drinking gives you powers, use the +10 Charisma or +10 Wisdom glasses. When drinking takes powers away, […]