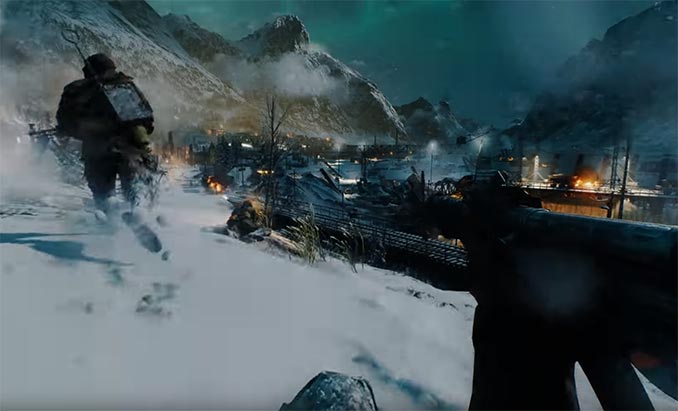 Battlefield V will have numerous multiplayer game modes, with the ultimate being Grand Operations. It combines a powerful narrative experience inspired by historical events with fierce 64 player action as two teams battle for in-operation “days” to complete a goal. Garnd Operations generally consist of 3 in-operation days, which translates into about an hour long game. Other multi-player modes include Breakthrough, Conquest, Domination, Frontlines, and Team Deathmatch.

Watch the Battlefield 5 Official Multiplayer Trailer from DICE and EA:

Every battle is unique. Every mode its own challenge. Battlefield V multiplayer provides unmatched intensity and scale in a sandbox of all-out war.

Take on classic modes like Conquest or experiences like Grand Operations, where you’ll participate in vast historical battles across multiple maps – and modes – and relive moments of bravery and desperation while fighting your way to the final objective.

If you were expecting gameplay footage instead of cinematics, the trailer may leave you disappointed. Never fear though, because they demoed Battlefield gameplay at E3, as you can see in this Battlefield 5 Grand Operations Gameplay video from jackfrags:

Battlefield 5 Multiplayer Gameplay on Grand Operations. This is PC gameplay of Battlefield 5 recorded at a recent event, showing new mechanics, plenty of action and an overview of the new game mode. Video sponsored by EA.

Grand Operations is the ultimate multiplayer experience, designed to seamlessly showcase the maps and modes of Battlefield™ V. Each Grand Operation presents a powerful narrative experience inspired by historical events. Shortly after launch, you will be able to take part in the first Grand Operation. In the months that follow, you’ll continue the fight across other unseen and unplayed battlefields of World War 2.

Grand Operations is our upgraded version of Operations in Battlefield™ 1– but now much greater than the sum of its parts. This modular experience takes players across fictional in-operation “days,” where each day is represented by a round played on a combination of a map and mode that brings the narrative to life. The actions you, your squad, and your team take on day one will have a direct impact on the narrative and gameplay start of day two, which in result will impact day three, and so on.

Play well on the first day and deploy with an adequate supply of ammo or vehicles when the map shifts, for example. Do poorly, and you’ll deploy the next day with perhaps fewer respawns, vehicles, or other resources.

Another important change is how each play session ensures all players get to play all featured locations – no more getting stopped by an overwhelming defense on that first point. Most Grand Operations in Battlefield V consist of three in-operation days – about an hour of total game time – but some may last longer if the score is close.

In Breakthrough, the map is divided into several sectors, all owned by the defending team at start of match. If you’re on the attacking team, your goal is to take the sectors one by one in a sequential order, which is done by controlling all the sector’s available capture points. Battlefield 1 players will recognize Breakthrough from Operations, where it was the sole game mode.

Each engagement in Breakthrough is a frantic fight to capture sectors as an attacker and, for the defense, on-the-fly planning to keep the opposition at bay. Keep in mind, forcing a retreat in Battlefield V involves overcoming fortified positions from the defensive side, adding a layer of strategy on both ends.

No game mode is more synonymous with the Battlefield series than Conquest. A version of this 64-player map control mode has appeared in every Battlefield game and will return this year with all the Battlefield V features at your disposal.

Fight for key locations on a massive map where you and your team will come closer to victory when you control the majority of the flags. Build defenses and solidify your frontlines using the recently-unveiled Fortifications system, towable weaponry, and Squad Reinforcements.

Veterans of Battlefield will recognize the more classic ruleset and approach to the innards of how Conquest works this time – including some Conquest Assault variants.

Less is more in Domination mode, a Battlefield must. But this infantry-focused, scaled-down version of Conquest has just as much action as its big brother. In Domination, the two teams fight over ownership of multiple objectives. Owning at least half of these flags will cause the enemy team to start losing respawns. Control more than half, and your enemy team will bleed respawns even faster. As you take on these close-quarter engagements, you’ll find there’s no better place to test the composition and chemistry of your Company.

The tug-of-war combat of Frontlines can be described as a mix of Conquest, Rush, and Battlefield 4’s Obliteration mode.

In Frontlines, both teams fight for control over one flag objective at a time, unlocking the next one to push the frontline towards the enemy base. Conquering the last flag opens the enemy base, and their Strategic Objectives become vulnerable to planted explosives – a new addition in Frontlines for Battlefield V.

Battlefield whittled down to its combat core. Team Deathmatch is fast-paced infantry warfare where squad cohesion is more important than ever. Inflict the most causalities out of the two infantry teams, and the day is yours.

Time for a Close Encounter of the Lego kind with this awesome LEGO UFO Abduction set.  Aliens may or may not be invading our own skies, but you can create your own alien invasion LEGO style. The UFO has an illuminated tractor beam and you […]

Good looking people may have ruled middle school, high school, college, and up until their early and mid-twenties, maybe a few ruled in their thirties, and cougars have their forties, BUT they are not going to rule the world!  Finally we get our moment to […]