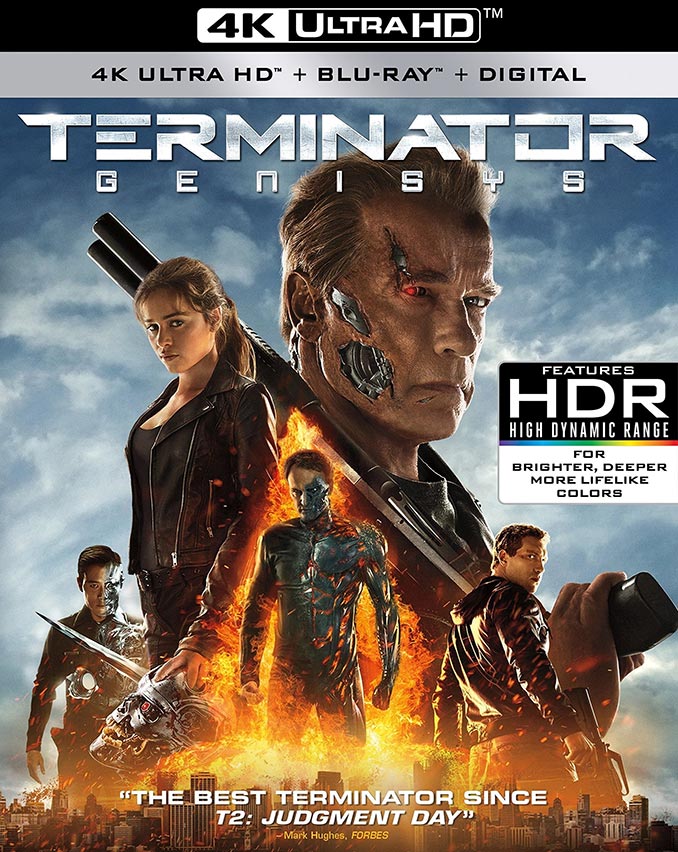 Today, Terminator Genisys was released on 4K Ultra HD Blu-ray. The movie originally hit theaters on July 1, 2015 and was released to Blu-Ray and DVD on November 10, 2015, but today (June 12, 2018) is the first availability of the 4K ultra high definition version.

It’s a film that really takes advantage of the benefits of 4K and HDR. The movie was finished in 2K (although shot with even higher resolution digital cameras), which is much higher than 1080p and will translate into a sharp detailed image. Also, the movie is quite dark, especially for the first half, so the benefits of high dynamic range will really shine with the shadow details, not to mention the explosions, laser blasts, and red-eyed terminators. Besides for the high video quality, movies like this are why multi channel sound systems with beefy subwoofers are so important, and the Dolby Atmos soundtrack will not disappoint.

When John Connor (Jason Clarke), leader of the human resistance, sends Sgt. Kyle Reese (Jai Courtney) back to 1984 to protect Sarah Connor (Emilia Clarke) and safeguard the future, an unexpected turn of events creates a fractured timeline. Now, Sgt. Reese finds himself in a new and unfamiliar version of the past, where he is faced with unlikely allies, including the Guardian (Arnold Schwarzenegger), dangerous new enemies, and an unexpected new mission: To reset the future…

No merchants have a special exclusive version of Terminator Genisys 4K Ultra HD, it is the same at all of them. This makes Walmart the best place to buy it right now, since it is the cheapest at $18.09.  (The list price is $31.99)

If it could talk, the Terminator Genisys Endoskeleton would tell you nobody can hear you scream in the future. Nobody except Skynet, that is, because humanity has been all but destroyed. Standing 13-inches tall, this engine of destruction comes with a wide variety of humanity-ending […]