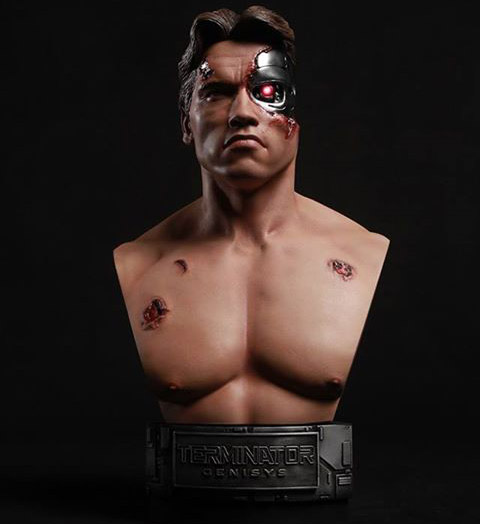 He promised he’d be back and the Terminator Genisys Battle-Damaged T-800 1:2 Scale Bust proves that Arnold keeps his word. Who knew a killer cyborg from the future could be so trust-worthy?

He’s large. He’s unstoppable. And he’s most likely naked but we don’t have to worry about that because this 14-inch tall bust doesn’t go that low.

Based on Arnold Schwarzenegger’s portrayal as the evil T-800 in Terminator Genisys (not to be confused with Schwarzenegger’s portrayal of the Guardian), and using the CGI scan files as a base, the bust features movie accurate details of the damage done by the Guardian to the evil Terminator who was just looking to score some clothes at this point in the movie. Poor guy. The revealed cyborg eye also lights up, to capture that cool Terminator effect.

The Terminator Genisys Battle-Damaged T-800 1:2 Scale Bust will be available April 2016 but it can be pre-ordered now for $379.99 at Entertainment Earth.

This Terminator Genisys T-800 Pops Version 7-Inch Scale Action Figure depicts the T-800 as seen in the latest movie. This version of the Guardian T-800 is based on his appearance in the movie’s future timeline, when he’s known to Sarah Connor as “Pops.” The 7-inch […]

If it could talk, the Terminator Genisys Endoskeleton would tell you nobody can hear you scream in the future. Nobody except Skynet, that is, because humanity has been all but destroyed. Standing 13-inches tall, this engine of destruction comes with a wide variety of humanity-ending […]

We’ve seen a lot of Cool Bookends over the years on GeekAlerts, but these Terminator T-800 Bookends rank among the best ever. Use them to keep your books, Blu-rays, or video games standing neatly on a bookshelf, or simply display these magnificent sculptures like […]

This Terminator: Genisys T-800 Body Knocker Bobble Head is just the desk toy you need to celebrate the latest Terminator movie. It is powered by the sun. You don’t need any batteries. This bobbling T-800 measures about 6-inches tall and rocks from side-to-side when exposed […]

This Terminator Genisys Endoskeleton Skull 1:1 Scale Prop Replica will likely be the most menacing piece in your collection. It is based on the Terminator from the new movie Terminator Genisys. This replica features a completely new sculpture and design by Legacy Effects. It was […]