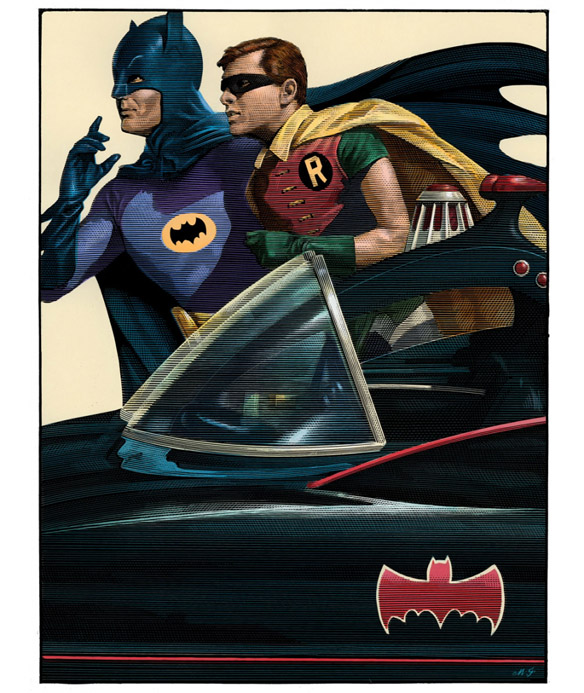 The Dynamic Duo races into action on the Batman 66′ Art Print.

Limited to only 150 pieces, this 18″ x 24″ print is comprised of 18 different colors… which is very cool for a screenprinting project. Based on the Batman television series from the late 60s, Adam West’s Batman and Burt Ward’s Robin race into action, with the Batmobile (or at least part of it) also making its presence known.

No, I have no idea what’s going on with the left ear of Batman’s cowl but it looks sort of weird; like it’s longer than it should be. Still a cool image, though.

If you have pierced ears and like to freak people out, you need a pair of these Little Third Ear Earrings. They’re handmade earrings that look like a tiny little ear. With another version (pictured on top of this page) that ear has a teeny […]

The Caped Crusaders unleash the KAPOW with the Batman & Robin Dynamic Duo Premium Art Print. The villains of 1966 Gotham City need to feel the fear because Batman and Robin aren’t wearing kid gloves on this 18″ x 24″ print by artist Jon Foster. […]

Diana of Themyscira unleashes her power on the Wonder Woman: Hell Hath No Fury Art Print. One of the most iconic scenes from 2017s Wonder Woman is captured in this colorful 18.5″ x 22.5″ print as Gal Gadot’s Wonder Woman slams her gauntlets together to […]

Normally Batman’s cowl belongs on his head, but this ring puts the Caped Crusader’s cowl right on your finger. This Batman Black Cowl Ring looks great and tells the world that you are on team Batman. This awesome ring is made of Stainless Steel that […]