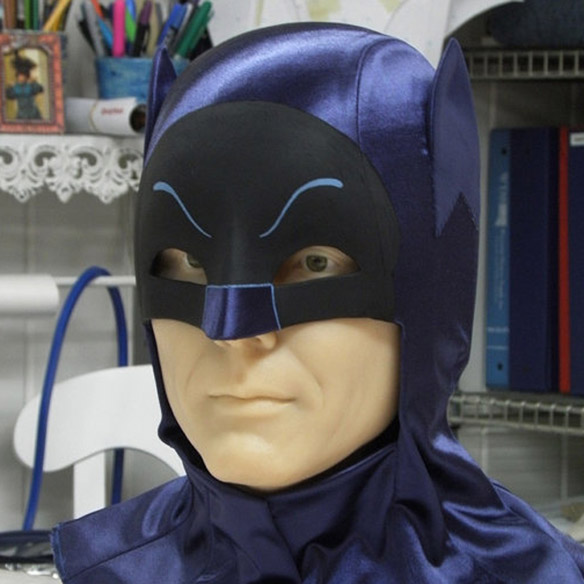 Always be yourself, unless you can be Batman; then, always be Batman. Words of wisdom from a popular Internet meme and the 1966 Batman Cowl lets you be the Caped Crusader, retro-style.

The Dark Knight has had various looks throughout the years, and collectibles like the Batman The Dark Knight 1:1 Scale Cowl Replica and the Batman and Robin Batman Life-Size Sonar Cowl Prop Replica let Bat-fans feel like they occasionally go out in the night as Gotham City’s protector, but these collectibles always have that one line that can rain on your parade – for display only; not to be worn.

However, you won’t find any such party-pooper line if you want to dress up as Adam West’s version of Batman. That’s right. It’s not just a pretty thing to look at; you can wear it, too.

The retro Cowl is covered in satin spandex, with Velcro straps on the front closure. It fits a head size of 23-1/2-inches but foam inserts allow it to be adjusted to fit various head sizes. The outside circumference of the cowl is 27 inches.

If you’re feeling really dedicated to the old-school Batman, you can get the Replica 66 Batman Cowl for $1,500 and feel like you’re in the company of TV royalty because even Adam West has one of these.

If you don’t have access to the Wayne fortune, you can still be quite happy with the 1966 Batman Cowl for $475 at WilliamsStudio2’s Etsy shop.

The Dark Knight was looking pretty tough in his latest trio of movies but the Batman 1989 Movie Cowl Prop Replica reminds us of a different Batman; a Batman that was first in proving the Caped Crusader still had what it took to bring in […]

Normally Batman’s cowl belongs on his head, but this ring puts the Caped Crusader’s cowl right on your finger. This Batman Black Cowl Ring looks great and tells the world that you are on team Batman. This awesome ring is made of Stainless Steel that […]

Turn your kid into Batman with this cool retro Batman Blue Kids Costume Hoodie with Cowl. Now all your kid needs is a sidekick wearing a Robin hoodie and he will be ready to defend Gotham. This hoodie lets your child to channel their inner […]