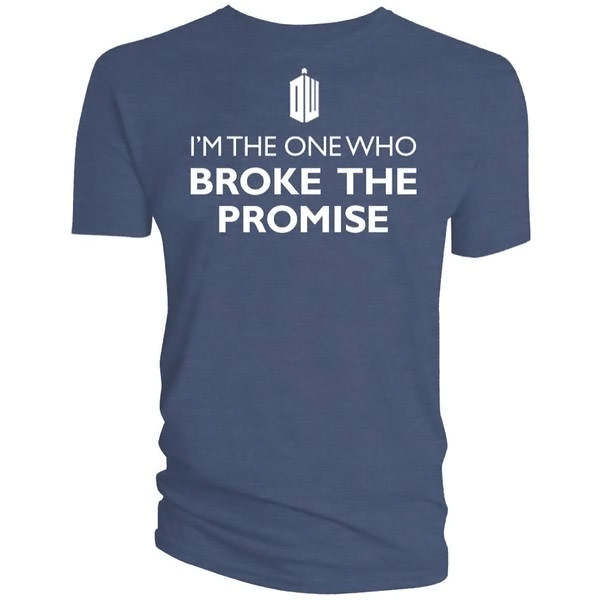 Reveal your true nature and let everyone know you’re an incarnation of the Doctor with the Doctor Who The Promise T-Shirt, which will let fellow Whovians know you’re not just any ol’ Doctor; you’re the one unworthy of the name, the one who broke the promise.

With this shirt, you’ll be able to separate the true Doctor Who fans from the fakes, or at least find out which Whovians really need to get with the program and watch the last episode of last season.

This particular Time Lord chose to call himself the Doctor because he saw the name as being a promise to protect and defend those in need… but one regeneration broke that promise. Was it you?

Doctor Who The One Who Broke The Promise T-Shirt

Great men are forged in fire. It is the privilege of lesser men to light the flame. And truly awesome men (and women) wear the Doctor Who The One Who Broke The Promise T-Shirt. The War Doctor became an instant hit with Whovians, despite his […]

This super-cute Funko POP! version of the Tenth Doctor in the Ninth Doctor’s clothing is fantastic. He’s still glowing from his regeneration. Fans of David Tennant’s Doctor are going to want to display this figure prominently in their collection. Doctor Who Glow 10th Doctor Regeneration […]

Doctor Who ‘Doctor With One Heart’ T-Shirt

The Doctor gets a helping hand with love on the Doctor Who ‘Doctor With One Heart’ T-Shirt, and I hope Whovians get a little chuckle out of that handy reference. He’s been called Meta-Crisis Doctor, Ten II, the human Doctor, and Doctor 10.5, but he’ll […]

David Tennant’s Tenth Doctor is a favorite for many Whovians and this Doctor Who Nighttime Doctor T-Shirt does Ten justice with some seriously cool artwork that perfectly captures the Time Lord’s moodiness and quirkiness. The Tenth Doctor makes an impressive figure on this tee, with […]