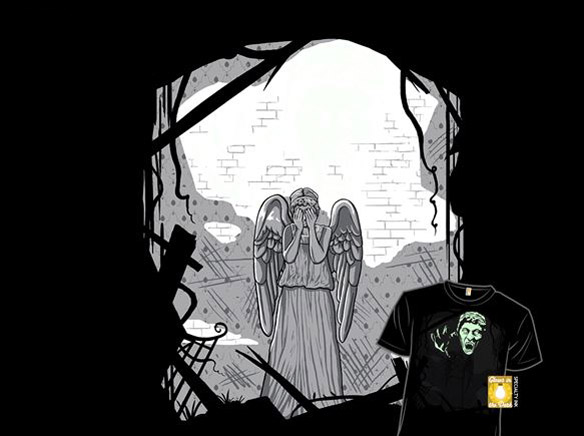 Aside from the fact that statues coming to life is creepy, the Weeping Angels are popular Whovian villains because of their speed, and the Doctor Who Blink and You’re… T-Shirt does a pretty good job of recreating just how fast a deadly stone angel can appear in front of you.

In the universe of Doctor Who, you see a statue across the courtyard. Blink. Now it’s only a few feet from you, covering that large distance in the blink of an eye. Blink. Now you’re dead.

In the real universe, you see someone wearing a black t-shirt with a Weeping Angel in the classic ‘face covered’ pose. You blink… and someone turns out the lights. Now the Angel is reaching for you, fangs bared.

Freaky? Let’s just say you probably won’t be sleeping with your closet door open after this tee becomes a part of your wardrobe. 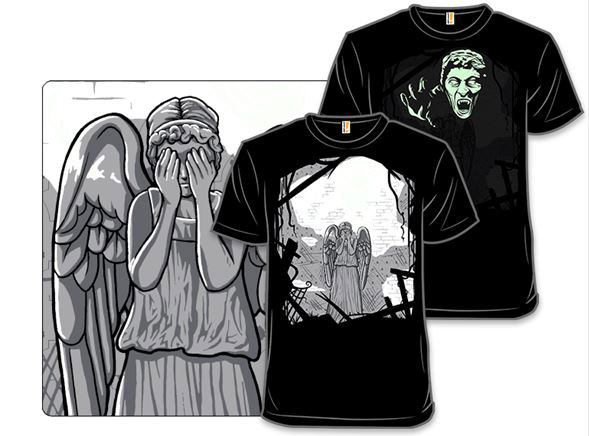 Both the regular art and the glow-in-the-dark art were created by the artist known as Wakho.

The Doctor Who Blink and You’re… T-Shirt is available for $15 at Shirt Woot.

There’s only one way I’d want to cross paths with a Weeping Angel, and the stylish picture on the Doctor Who Don’t Blink Premium T-Shirt is that way. I’m a huge fan of Doctor Who, and the Weeping Angels have to take the #1 spot […]

Whether you’re coming or going, the Doctor Who Don’t Blink T-Shirt will have the eyes of Whovians watering as they strain to keep their eyes open until you’re far enough way for them to feel safe. The black, 100% cotton tee has two of the […]

You’ll weep with joy when you get hang up these Doctor Who Weeping Angel String Lights. Let some of the Doctor’s most horrible foes light up your life. Just don’t blink and you will be okay. I think. Just keep an eye on these lights. […]