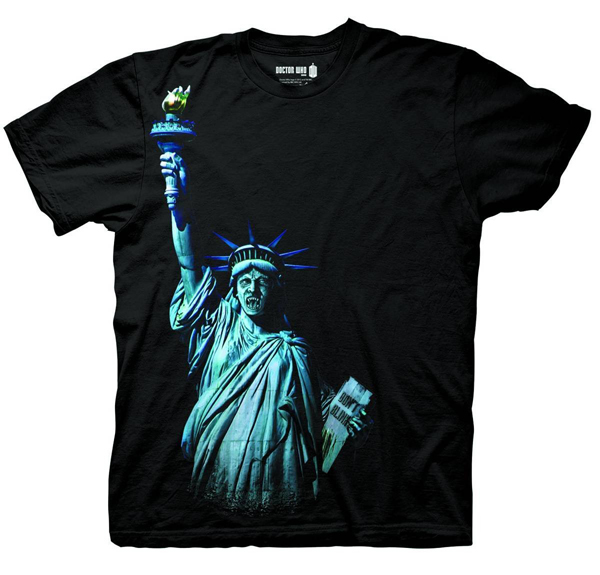 The final appearance of Amy and Rory with the Doctor revealed what could possibly be everyone’s worst nightmare, and the Doctor Who Angel Of Liberty T-Shirt lets you actually wear this fear-inducing character on your chest.

When it comes to fearsome foes, the Weeping Angels have to take top prize, and the biggest Angel of them all was revealed during the Pond’s swan song when we discovered that the noble Statue of Liberty is nothing more than a super-sized Weeping Angel.

To truly feel the fear, you have to stretch the imagination and believe there’s a moment in time in New York City when there isn’t even one person looking at the Statue but we are talking about a show that features a guy traveling through time in something that looks like an old-timey police box so it shouldn’t be too hard to picture a scenario when this gigantic Angel would have the freedom to move around a bit.

The short-sleeve, black t-shirt features the Liberty Angel with her fearsome, fang-filled snarl, and I love the Whovian touch of having the stone tablet she’s carrying bear the ‘Don’t Blink’ warning instead of the ‘July IV M DCCL XXVI’ inscription the Statue actually has.

Now you can become one of the Doctor’s fiercest foes. The Weeping Angels. This Halloween, scare everyone with this Doctor Who Weeping Angel Mask. Everyone who sees you will freeze in place. They won’t want to blink. They know what happens. They will get sent […]