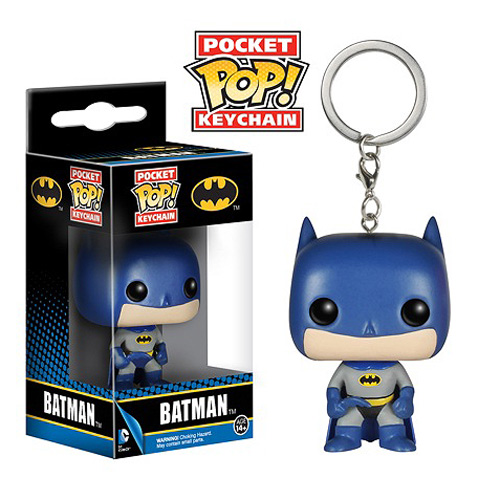 He is vengeance. He is the night. He is… a key chain? Yes, the design gods at Funko have given us the Batman Pop! Vinyl Figure DC Comics Key Chain, and the Dark Knight has now added cuteness to his arsenal of weapons.

Funko apparently has plans to rule the world and their mission of global conquest seems to be going well. As if the Pop! vinyl figures weren’t awesome enough, they also recently stepped into plush territory with their Fabrikations figures. And now, no pocket is safe with these Pocket Pop! key chains entering the battle.

Measuring 1 1/2-inches tall, this tiny Caped Crusader is ready to protect your keys from the forces of evil.

The Batman Pop! Vinyl Figure DC Comics Key Chain will be available November 2014 but it can be pre-ordered now for $4.99 at Entertainment Earth.

Hey, everyone, the new web-slinger is swinging into your Funko collection with the Captain America: Civil War Pop! Vinyl Figure and Key Chain 4-Pack. If you’re into Pop! Vinyl figures, you’re going to love this 4-pack. In addition to Hawkeye and Spider-Man figures that stand […]

The baddest redneck to ever fire a crossbow bolt through a walker’s head is now pocket-sized with the Walking Dead Daryl Dixon Pop! Vinyl Figure Key Chain. This little 1 1/2-inch-tall version of Daryl might not be able to take on a horde of walkers […]

The Ghostbusters Stay Puft Marshmallow Man Pocket Pop! Key Chain is an adorable version of everyone’s favorite Marshmallow Man. He is small in key chain form, but big cute. This key chain features the not so evil villain as a cute mini for your keys. […]

If you’re the type of person who curses a lot, then you might want to check out the Bullsh*t Button Key Chain. It won’t exactly break your habit of cursing out loud, but hey, at least it can do your cursing for you until you […]