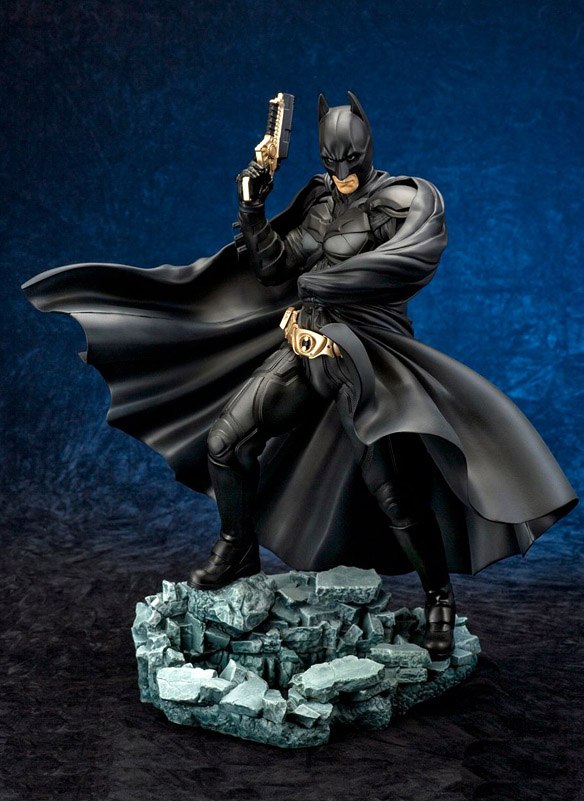 If you prefer movie-Batman over comic-Batman, you’ll be interested in the Dark Knight Rises Batman ArtFX Statue because it looks so real that people will think you reached through the screen and plucked Christian Bale right out of the film.

Standing over 15-inches tall and standing on a rocky display base that includes a light-up bat signal, Gotham City’s protector is sculpted to recreate his appearance in The Dark Knight Rises, and interchangeable parts almost give you two statues in one because Batman can be displayed with either his grappling-hook gun or his latest toy, the EMP rifle. 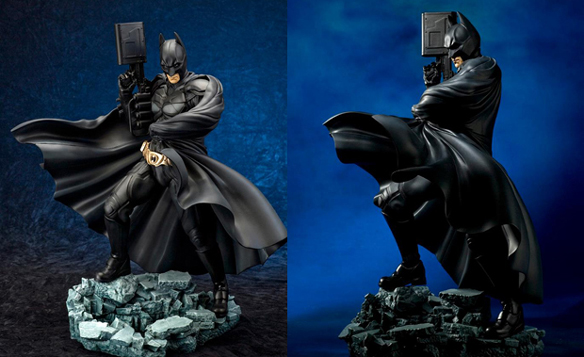 A Kotobukiya Japanese import! The Dark Knight is back! Kotobukiya is proud to present a new ARTFX Statue based on the upcoming film The Dark Knight Rises. Featuring a beautifully detailed sculpt recreating Batman’s specific appearance in the new film, this new version of the character faithfully recreates the hero’s intricate armored bat-suit with cape and cowl. Standing ready for action, the world’s greatest detective oversees Gotham City from the top of a rocky landscape. Staring down his enemies with his trademark scowl, Batman holds his flowing cape in front of him with his left hand while his right wields one of his wonderful toys; with interchangeable parts you can display him with either a grapple gun or his EMP rifle! Sculpted by MIC, Batman The Dark Knight Rises towers over 15 inches tall (1/6th scale) on a rocky display base that includes a hidden light-up bat symbol.

Whether you’re a lifelong DC comics fan or just really enjoyed the last film in the Dark Knight trilogy, you can add the Dark Knight Rises Batman ArtFX Statue to your collection for $119.99 at Entertainment Earth and for $114.97 at Amazon.com.

The Dark Knight Rises will be hitting theaters soon and you can get ready for the action with this Batman Dark Knight Rises Batman Bobble Head. He is sort of rising. I mean he is in a stepping upward position. This bobble head is based […]

Be the guardian of Gotham with this super comfortable The Dark Knight Rises Throw Blanket with Sleeves. You will be a very warm and toasty crime fighter while you sit on the couch and watch the Dark Knight trilogy. This adult sized Batman Costume Throw […]

Meow! The new Batman movie The Dark Knight Rises, will have a ton of visual eye candy and one of the stunning visuals will be Anne Hathaway playing Catwoman. If you appreciate a feline thief as much as I do, you’ll want to get this […]

I can’t wait to see The Dark Knight Rises. At least we can start collecting the toys right now. This Dark Knight Rises Batpod is a 1/6th scale Batpod that is authentically detailed. It matches the scale of the Hot Toys’ figures from The Dark […]