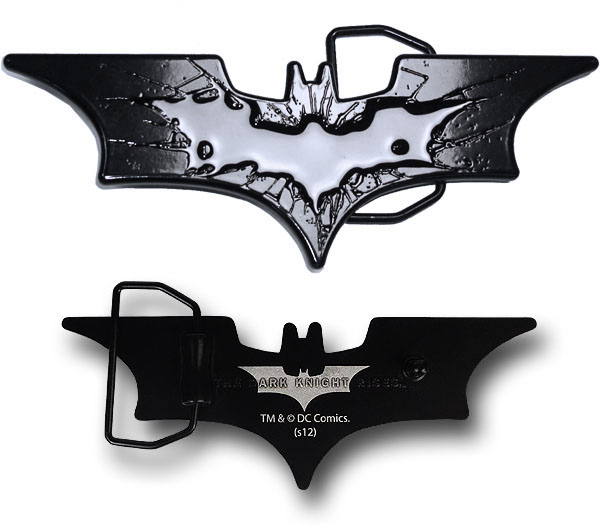 GeekAlerts has shown you many cool Belt Buckles, but nothing beats the Bat. Sleek and stylish, this officially licensed, black 6 inch metallic buckle is perfect for any outfit from jeans to business casual…The way Bruce Wayne does it.

Enjoy signature Batman attire as you get ready for the blockbuster release of The Dark Knight Rises this summer.

Measuring 6″ across (from wingtip to wingtip) and 2.25″ high, this black, metallic belt buckle is rendered in the shape of Batman’s symbol, taken from the third film in Christopher Nolan’ Batman trilogy, The Dark Knight Rises! And look; within the symbol, slightly indented, is the particularly stressed, cracked and weathered Bat symbol formed from the peaks of a crumbling, Gotham cityscape in many a Dark Knight Rises advertisement.

You can purchase the Batman Dark Knight Rises Metal Belt Buckle at Superherostuff.com for $21.99, at Amazon.com for $17.88 and at Stylinonline.com for $19.88.

Do you need another cool metal belt buckle for your collection? How about the TMNT Heads Metal Belt Buckle? This 4.5 inch wide and 2.5 inch tall buckle features your favorite heroes in a half shell. Strap the Teenage Mutant Ninja Turtles belt buckle on […]

You’re not into the Dark Knight’s cape or cowl but you’re seriously digging the utility belt look? The DC Comics Batman Reversible Belt and Buckle is the belt you’ve been looking for. You don’t get cool things like smoke bombs, grappling hooks, or Bat-Shark-Repellent but […]