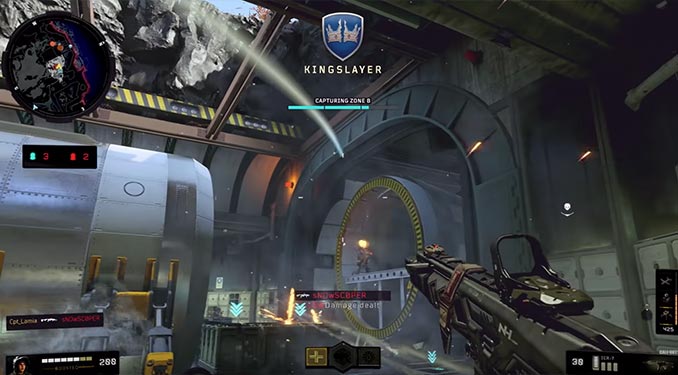 Cinematic Trailers can be fun to watch, but when it comes to CoD many players only care about one thing: multiplayer. While it does mix cinematics with the gameplay, this Call of Duty: Black Ops 4 — Multiplayer Reveal Trailer gives you a taste of the intense action and fluid gameplay we hope to get from the next release in the CoD franchise.

Coming to the PlayStation 4, Xbox One, and PC on October 12, 2018, Call of Duty: Black Ops 4 was developed by the Treyarch studio of Activision.

Call of Duty: Black Ops 4 Multiplayer raises the bar for the famed multiplayer mode delivering the most thrilling grounded combat experience yet with a focus on tactical gameplay and player choice.

The Multiplayer experience in Call of Duty: Black Ops 4 has been built from the ground up to incorporate the core Black Ops experience, while cranking everything to the max. Treyarch Studio Co-Head Dan Bunting calls it, “Our most ambitious Multiplayer to date. It delivers grounded combat, tight gunplay, an authentic military feel, fluid and responsive controls, all wrapped in the most refined, team tactical experience we’ve ever delivered.”

Black Ops has always been about weapons, and with Black Ops 4 there are multiple improvements to the gun systems – more than Black Ops, Black Ops 2 and Black Ops 3 combined. Weapons now feel like a character unto themselves: barrels ooze smoke, muzzle flashes light up a room, bullet impacts are massive, and real 3D tracers will allow you to follow bullet paths back to their origin.

Specialists are back in Black Ops 4 and are both new and reimagined. They also now have Special Issue Equipment that only they can equip in Create a Class, which will deliver unique capabilities for your team to reinforce tactical gameplay and present the opportunity to discover powerful combinations that work together.

Black Ops 4 is also making a change to how health works in the game, as it will no longer automatically regenerate. Players will manually trigger the healing process with a button press.

Further tweaking the player experience in Black Ops 4 is the addition of fog of war. Players will now only see their immediate surrounding on the mini-map, or the those of their fellow players. Enemies will reveal their positions when firing a weapon that is not suppressed, and of course your favorite Black Ops Scorestreaks still exist and will perform as you would expect.

Black Ops 4 is built to be fluid without slowing the player down. With that in mind, you can still keep your guns up while doing many other things in the game, like throwing grenades, using equipment, activating Scorestreaks, and mantling.

Weapons, health, situational awareness, movement and the Specialists themselves all come together in the flow of combat in Call of Duty: Black Ops 4. For instance, Seraph is back and is equipped with Tac Deploy. This is a team-wide spawn beacon that allows you to spawn in a new area for a period of time, creating game-changing moments.

The Call of Duty Silvertone Rubber Bullet Strap Watch is a must for fans of Activision’s popular first person shooter franchise. This watch features the Call of Duty logo and a rubber band strap that has bullet accents on it. The strap measures about 8 […]