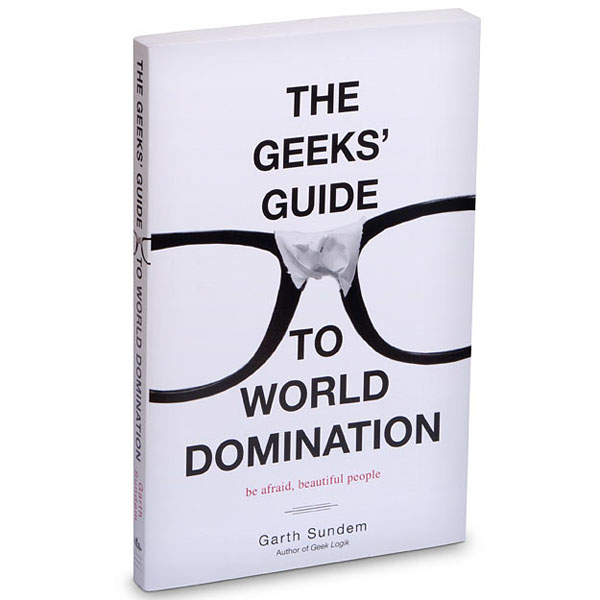 Good looking people may have ruled middle school, high school, college, and up until their early and mid-twenties, maybe a few ruled in their thirties, and cougars have their forties, BUT they are not going to rule the world!  Finally we get our moment to shine and it comes in the form of world domination.  Not bad, considering we only had to miss out on several drunken sexcapades through college and our twenties to get here.  The Geeks’ Guide to World Domination gives you the necessary skills and knowledge to be one of the ruling class of the future.  Be positive; you still got a shot.  Look around at today leaders; I don’t want to single anyone out, but they weren’t getting laid in college either.

Sorry, beautiful people. These days, from government to business to technology to Hollywood, geeks rule the world. Finally, here’s the book no self-respecting geek can live without: The Geeks’ Guide to World Domination. A guide jam-packed with 314.1516 short entries both useful and fun. You’ll learn such necessary skills and knowledge, such as how to:

You can purchase The Geeks’ Guide to World Domination at ThinkGeek for $11.99.

The Death Star was a scary place, but imagine how much worse it could’ve been if artist MC Escher had designed it. The Star Wars Death Star Relativity T-Shirt lets your imagination run wild as you see what Luke, Han, and the rest of the […]

So you’ve got a hot date tonight and totally forgot that you’ve got a family dinner to attend as well. What’s a girl (or guy) to do? There’s no easy solution when you’ve accidentally (or just stupidly) double-booked your evening. But depending on which party […]

Most geeks eventually flee the nest of their parents’ home and end up cooking for themselves. Since geeks are so smart, they tend to get all mad scientist in the kitchen and end up transforming themselves into amazing cooks. But the road to culinary success is often filled with speed bumps, sharp […]

Get huge savings right now on computers and electronics at the Geeks.com Black November Sale. Just like most people these days, we’re pretty impatient. That’s why we’ve been giving you the heads up on some great sales you can take advantage of before Black Friday […]