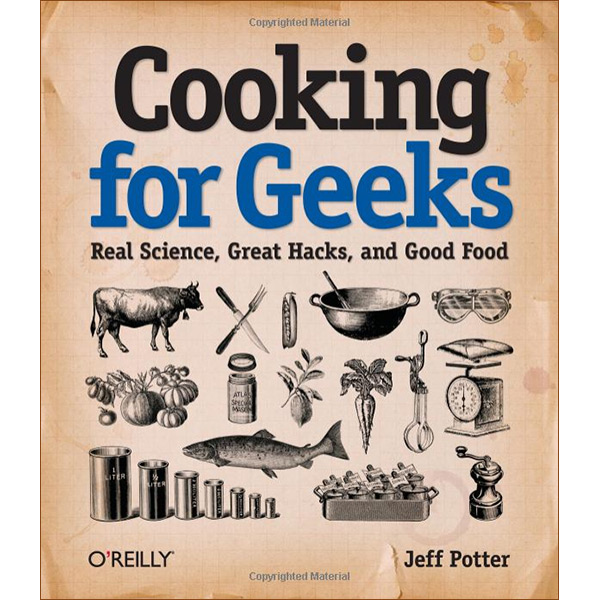 Most geeks eventually flee the nest of their parents’ home and end up cooking for themselves. Since geeks are so smart, they tend to get all mad scientist in the kitchen and end up transforming themselves into amazing cooks. But the road to culinary success is often filled with speed bumps, sharp curves, and deer in the headlights. Venison, anyone?

To bypass some of these hazards, self-proclaimed cooking geek Jeff Potter has written Cooking for Geeks: Real Science, Great Hacks, and Good Food. It’s a treasure trove of recipes and interesting tidbits on how to “hack” or optimize cooking techniques while navigating through uncharted territory.

We’re living in a time where we get information overload, even when searching for a simple recipe on the internet. The internet is filled with several cooking websites, apps and recipes that are meant to help you succeed in the kitchen. Then, if you’re curious enough, you can click on some of the recipe reviews and read about modifications everyone makes to the recipe and their personal recipe ratings.

You can also browse through photos that people upload to give you an idea of how the dish will look. Two hours later, after you’ve done an extensive search on that one recipe, you’ve run out of time to actually cook the dish. It makes you think that maybe you’d be more productive by just following the recipe out of a cookbook. “Cooking for Geeks” is a nice go-to book that’s relevant for modern-day cooking enthusiasts who appreciate the scientific side to cooking.

More than just a cookbook, Cooking for Geeks applies your curiosity to discovery, inspiration, and invention in the kitchen. Why is medium-rare steak so popular? Why do we bake some things at 350 F/175 C and others at 375 F/190 C? And how quickly does a pizza cook if we overclock an oven to 1,000 F/540 C? Author and cooking geek Jeff Potter provides the answers and offers a unique take on recipes — from the sweet (a “mean” chocolate chip cookie) to the savory (duck confit sugo).

It’s easier for a geek to learn from a young-at-heart cooking geek, rather than some ill-tempered hoity toity chef. We tend to identify more with the likes of Alton Brown, Sam the Cooking Guy, Bob Blumer, and Jeff Potter, who by the way seems to be gearing up to be a TV host. In addition to learning from geeks on TV, it’s also fun to learn to cook from our favorite sci-fi characters like Chewbacca and his Wookiee Cookies: The Star Wars Cookbook. And if we want to fine dine like members of the USS Voyager crew, all we have to do is consult The Star Trek Cookbook.

Just a Bunch of Recipes Cookbook by Sam the Cooking Guy

Sam Zien, aka Sam the Cooking Guy, is a testament to what happens when geeks follow their dreams. He ditched his biotech career to host his humble cooking show from his own kitchen on local San Diego TV and teach cooking classes around the city. The best part of his shows or videos has […]