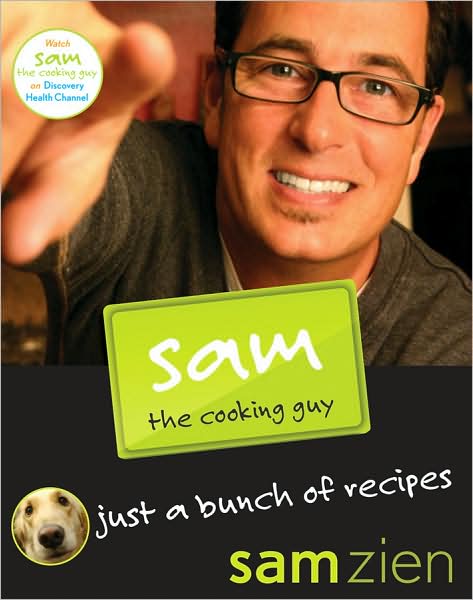 Sam Zien, aka Sam the Cooking Guy, is a testament to what happens when geeks follow their dreams. He ditched his biotech career to host his humble cooking show from his own kitchen on local San Diego TV and teach cooking classes around the city. The best part of his shows or videos has to be watching the unedited bloopers. He cuts himself, drops things, his dog makes surprise appearances, he spills stuff…he’s hilarious! Zien is now a 12-time Emmy-winning celebrity figure on Discovery Health Channel, just being himself and doing what he loves; showing people how to cook good but not overly complicated food. He has also penned three cookbooks, but the first one to make it big was “Just a Bunch of Recipes.”

So this book is about food that’s big in taste and small in effort. Just great-tasting stuff with no fancy techniques and definitely no over-the-top ingredients, as in everything-comes-from-a-regular-supermarket–cool concept, huh? It’s just a bunch of recipes you’ll easily be able to make and enjoy.
–From Sam the Cooking Guy

“Just a Bunch of Recipes” is available at Amazon, new from $6.95 to $12.89. You can also visit his website at www.thecookingguy.com, where you can watch several of his inspiring recipe videos and buy his other cookbooks.

This isn’t the first geeky cookbook to hit the GA press. We’ve also featured the Wookiee Cookies: The Star Wars Cookbook and The Star Trek Cookbook.

Most geeks eventually flee the nest of their parents’ home and end up cooking for themselves. Since geeks are so smart, they tend to get all mad scientist in the kitchen and end up transforming themselves into amazing cooks. But the road to culinary success is often filled with speed bumps, sharp […]