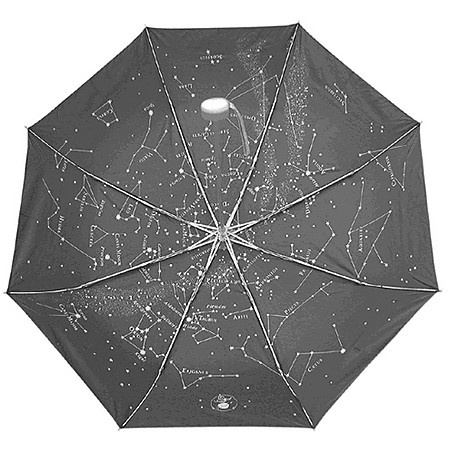 “Don’t go walking alone in the dark, especially when it’s raining,” my mother always used to say. And really, she didn’t need to warn me. I don’t want to go prancing around at night in a downpour just waiting to get mugged. And while the Glow-in-the-Dark Planisphere Folding Umbrella won’t make you mug-proof, it will make you feel at least a little safer while staying dry.

Those markings you see on the Glow-in-the-Dark Planisphere Folding Umbrella aren’t just random markings; they’re actually the constellations that you can observe yourself in the night sky. And even though it’s day time, you can literally still walk under the stars when you’re under the shade of this umbrella. 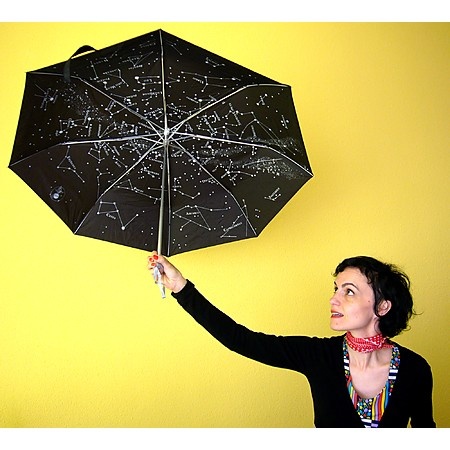 Protect yourself from the rain with this umbrella full of constellations and stars. It’s a folding umbrella that looks normal but, when you open it… a complete planisphere unfolds before you.

Look for constellations such as Aquarius, Orion or Aries, and observe the most important stars up close, without getting wet and without having to use a microscope.

And at night, enjoy a luminescent version of the same show, because the planisphere glows in the dark. Rainy nights are no longer an excuse to stay at home!

The Glow-in-the-Dark Planisphere Folding Umbrella is available from Curiosite for $26.38.

Raindrops keep falling on my head. Are you feeling a bit waterlogged lately? Well you can’t change the bad weather, but you can book a trip to sunny L.A. – or- give crapulous weather the middle finger by stepping out with the awesome Lumadot LED Umbrella.

Umbrellas with big personality such as the Sock Monkey Umbrella, Up Yours Umbrella and Goggles Umbrella don’t deserve to be cast away in a corner. They ought to hang out on a fresh umbrella stand like the Grassy i-Umbrella Stand. Just put an “i” in front of anything and […]

Ever tried walking in the rain with an umbrella over your head and bumping into the person/lamp post/mailbox that was right in front of you? Chances are you already have, if you’ve got one of those bigger and deeper domed umbrellas. If you feel like […]

There are all kinds of pizza cutter out there that will help you to slice up your pizza quick and easy, but if you want something that gives you some extra leverage, check out the Folding Pizza Wheel. It features a non-stick coated wheel and […]