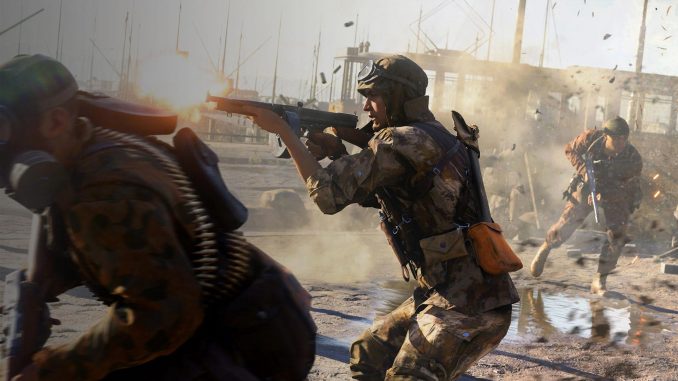 Watch the new Battlefield 5 Devastation of Rotterdam Trailer that Electronic Arts unveiled for gamescom 2018, the video game trade fair in Germany. Previous trailers for the game are the Reveal Trailer and the Multiplayer Trailer. This new one showcases a host of gameplay features as well as showing off parts of quite a few of the maps: Rotterdam, Devastation, Twisted Steel, and Hamada.

Battlefield 5 is designed for increased maneuverability, and the trailer showcases jumping, sliding, vaulting, rolling, diving, and even sprinting while crouched. They also promise improved, more realistic physics, including concussive effects of explosions that knock back players off their feet.

Stay tuned until the end of the video for a tease of the Battle Royale mode where a circular fire shrinks the playable map area.

See new maps and gameplay in the official Battlefield V Gamescom Trailer. From the shattered streets of Rotterdam to the burning sands of North Africa, Battlefield will never be the same.

From the shattered streets of Rotterdam to the burning sands of North Africa, the latest Battlefield™ V trailer shows how you and your squad will write the untold, discover the unseen, and play the unfamiliar stories of World War 2. On display are the many improvements of game mechanics central to the Battlefield franchise, such as multiplayer maps that can house the chaos of 64-player battles, the rock-paper-scissors backbone of infantry versus vehicles versus aircraft, and supreme destruction.

If you are looking for some cool wall art to keep your ever-changing mood satisfied, you could drop some serious cash on the Giant Scrabble Wall Game or go with this Sands Of Time 360 Degree Rotating Wall Art. Handmade by Klaus Bosch in Austria, […]