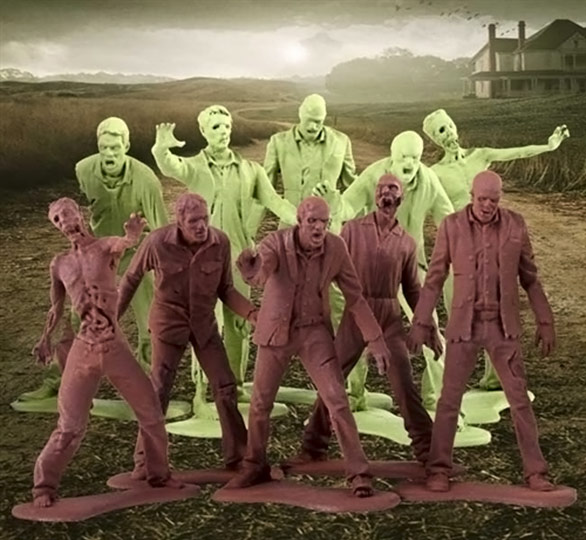 The classic plastic army men toys have been updated with an undead twist in these new The Walking Dead Zombie Army Men. Relive the bloody black versus tan battles from your youth, but this time there will be brains and guts even before you take your lighter to these guys. This set of 10 zombie figures features walking dead in two colors and a mix of designs/poses.

It’s a trip down memory lane… but with zombies! No longer constrained to the traditional green vs. tan, now kids and kids-at-heart alike can have their armies take on The Walking Dead! Use your green troops strategically to defend the last outposts of humanity, or take control of a horde of Walkers and decimate everything in your path in your never-ending lust to devour the living! With 10 figures per bag, featuring an assortment of different dynamic sculpts from the comic book and graphic novel series in two nightmarish colors at over 2-inches tall, The Walking Dead Zombie Army Men Mini-Figures are ready to infect your toy collection.

Pre-order a 10 pack of The Walking Dead Zombie Army Men for $13.99 at Entertainment Earth. They aren’t due to ship for a while, but order now for a nice surprise when they come in. Since all 10 mini-figures are zombies, you’ll want some Regular Army Men for them to fight.

If Daryl dies, we riot! How many of you were grabbing torches and pitchforks when this memorable scene happened? Luckily, the Walking Dead Army Men Series 2 Woodbury Arena Survivor Mini-Figure Set won’t create the same amount of tension because you’re in control of the […]