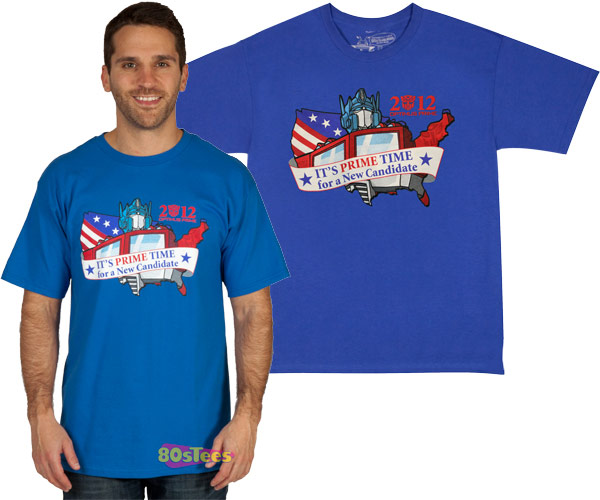 Perhaps it’s all the negative campaigning, instead of running on a positive vision and their record of accomplishments, but it never seems like we have a good choice when it’s time to vote. It gets to the point that we long for fictional characters to replace the actual candidates, and if that’s the case who would be a better leader than Optimus Prime from the Transformers? If you agree, you’ll want to wear this 2012 Optimus Prime Time Candidate T-Shirt.

Perhaps Obi-Wan Kenobi isn’t our only hope in the 2012 election. 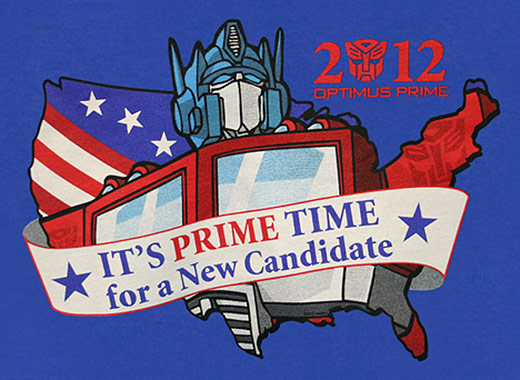 Vote Autobot in 2012! If you are like us, you think It’s Prime Time For A New Candidate! The Republicans and Democrats all have their talking points, but none of them beats what Optimus Prime has been saying since the 80s “Freedom is the right of all sentient beings.” Can’t argue with that. Show your support by wearing this 2012 Optimus Prime Time Shirt!

For everyone tired of the American election coverage, the good news is that it will be over soon. Perhaps that’s why this 2012 Optimus Prime Time T-Shirt is on sale for half price. Pick it up for just $11.99 at 80sTees.com.

The Batman Election Knight T-Shirt shows that there’s only one candidate we truly deserve, and that candidate is Bruce Wayne… or maybe it’s Batman. The marketing material seems a little confused on the matter. The name is Wayne but the image is Batman. Does that […]

I know summer is here and the cold nights are hopefully gone for a few months, but this Optimus Prime Transformer Hat was just too good to pass up. Available is sizes from infant to adult, there is more than meets the eye to this […]