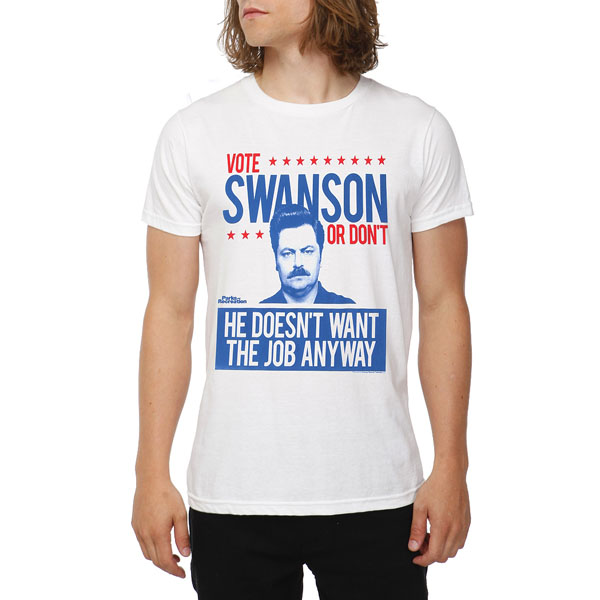 Grumpy, offensive, opinionated, and a true believer in Capitalism, Swanson would run the country with an iron fist. But as the shirt says, he doesn’t want the job anyway. He’d rather work at the municipal level and be left alone to eat his meat and potatoes (with his own BBQ sauce, that is.) Too bad, because he’d probably win the 2012 presidential election.

The Parks and Recreation Vote Ron Swanson T-Shirt is in the $20 range at Hot Topic, who is having a buy one get one 50% off promotion. Perfect if you want to get your cronies together and rally for Swanson in mass. Amazon.com has similar one for about $20 but it’s made of 100% cotton, if you’re not into synthetics.

Doctor Who Vote No On Daleks Red T-Shirt

It’s an election year and no matter who you vote for there is one thing we can all agree on. We don’t want a Dalek invasion. This Doctor Who Vote No On Daleks Red T-Shirt will let the world know where you stand. Because extermination […]

This Batman Joker Vote Me Credit Card Bottle Opener let’s the Joker help you get your beverage of choice open. The Joker will help to quench your thirst. It features a head shot of The Joker on one side and a Joker Vote For Me […]

Everyone loves Will Ferrell and Anchorman was one of his best movies to date. Now you can have your own Anchorman Ron Burgundy Talking Figure to play with and keep you company. Ron Burgundy, San Diego newscaster and ladies’ man of KVWN Channel 4 News […]

Ron Burgundy is the man! Wanna look just like him. Well, grow a mustache and wear this awesome Anchorman Ron Burgundy T-Shirt Costume. You’ll be dressed for success and have an uncanny yearning to report the local news. Plus you’ll be a man’s man. A […]