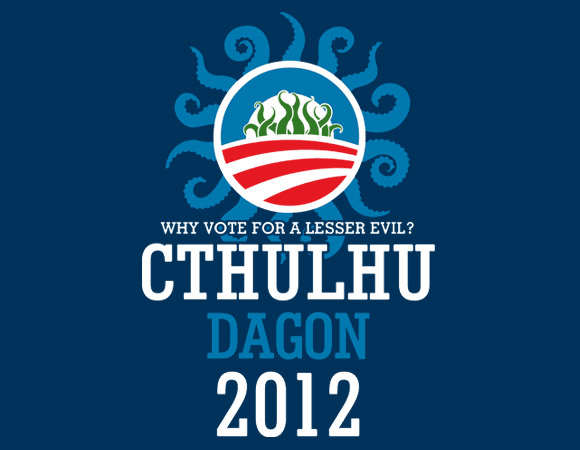 For many Americans, each presidential election is a choice for the lesser of two evils. Perhaps it’s the negative campaigns or the corrupt media, but none of the candidates ever seems perfect. If you’re tired of voting for the lesser of two evils, why not choose the greater evil and vote for Cthulhu. Show your support with one of these Cthulhu for President 2012 T-Shirts. 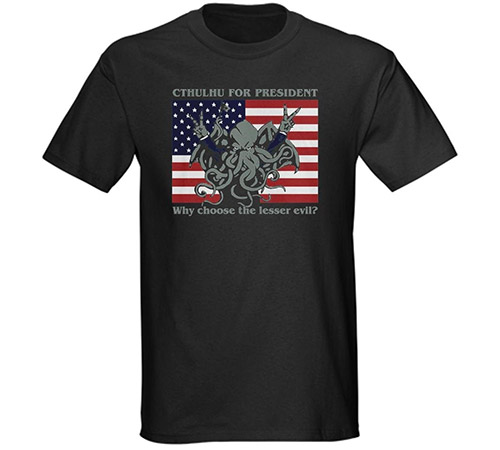 Cthulhu isn’t the only alternative choice out there for the 2012 elections. Check out the Parks And Recreation Vote Ron Swanson and Zombies 2012 t-shirts. There’s also the Obi Wan Kenobi 2012 Button; he’s our only hope. 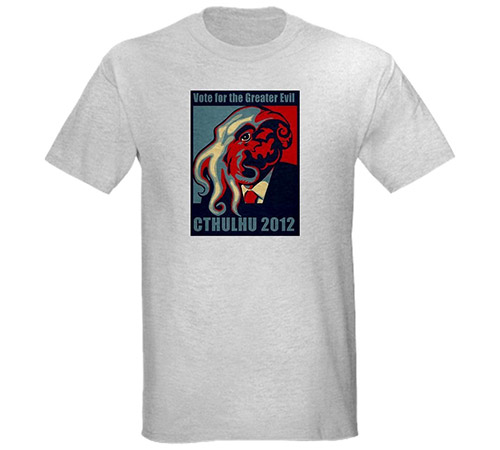 If you liked the Obama Hope poster from the 2008 election, but prefer something less political and with more zombies, check out the Zombie Brains Poster. 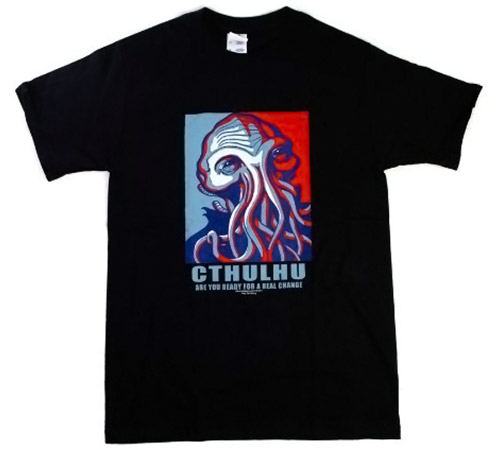 If the constant election coverage, desperate state of the economy, and pathetic foreign policy debacles are leaving you exasperated, take out your frustration on the President Obama Punching Bag and the Obama Toilet Paper. 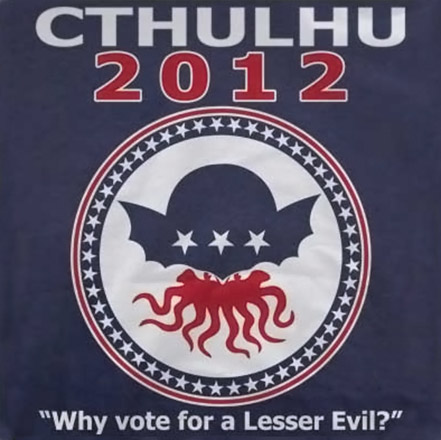 The picture at the top is the Cthulhu Dagon 2012 T-Shirt, which is on sale for just $10 at TShirtBordello.com. The picture on the bottom is the Cthulhu 2012 T-Shirt, which is only $6 at 6DollarShirts.com. The other t-shirts pictured here (along with many other Cthulhu for President / Cthulhu 2012 designs) are available at Amazon.com and CafePress.

You’ve heard of sock puppets, finger puppets, glove puppets, and probably even people puppets, but this is none of those! Okay, it is a hand puppet, but this is a Cthulhu first and foremost and should be feared as such. When Howard Phillips Lovecraft created […]

The lovable, huggable Cthulhu Plush.  I’m not really sure that this what H.P. Lovecraft had in mind when he created the Cthulhu, but over 80 years later and a lot less terrifying he’s here for you to enjoy.  So grab hold and let go of […]

GeekAlerts is about cool gadgets and fun products, and we prefer to stay out of politics. Besides, for us debates involve Star Wars vs. Star Trek, zombies vs. vampires, and iPhone vs. Android–not Democrats vs. Republicans. So even though we typically avoid political products, the […]

There’s just something about the Cthulhu that just creeps me out. H.P. Lovecraft probably made it up when he woke up from a terrible nightmare or something, because I can’t imagine what he was thinking when he came up with the Cthulhu. Of course, you can get […]

Knit holiday sweaters; you either love ’em or hate ’em. However, the Cthulhu Christmas Sweater is an atrocity that’s too funny to pass up. The model wearing this sweater is working it in a big way. He is just radiating holiday cheer. He’s like, “Ebenezer […]

Not only is the Inflatable Cthulhu Arm one of the greatest “I completely forgot about Halloween and am just going to wear this tentacle” costumes, it’s also great for all of those man caves where you have great times with the fellow geeks.  Poker?  Watching […]

Tell me, what’s a character that you can think of that’s creepier than the Cthulhu? It’s not my favorite fictional character, but a lot of people somehow find H.P. Lovecraft’s creation quite interesting. Case in point? There have been a variety of common items that […]