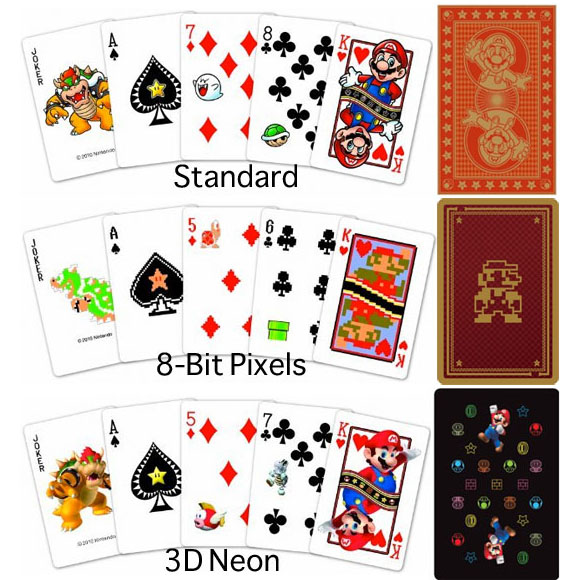 Playing card games never gets old. Look at how the machine called Vegas has been thriving off the card playing industry. Video games, old school or new, never get old either. Put ’em together and what have you got? Video game theme cards, such as the Super Mario Playing Cards that were exclusively launched in Japan last year.

Recently, we saw the 8-Bit Space Invaders Playing Cards and maybe you remember the delightful Atari Playing Cards from a few years ago. With the Mario Playing Cards, you can get all retro and choose the 8-Bit Version in its raw, pixelated glory. Or you can get a deck of Standard Mario Cards, featuring the graphically-improved Mario as he’s seen in the twenty-first century. Or you can get really modern and get the 3D Neon Mario Cards whose back side features Mario surrounded by colorful neon stuff from the games, like mushrooms, coins and goombas against a sleek black background. *sigh* Decisions, decisions.

No matter which deck you pick, each card will have a character or an object from the video games on the face side. Mario gets to be the King, while Bowser gets to be the Joker. Haha!

More expensive than your average deck of cards, one deck of Super Mario Playing Cards will set you back $40 US at the Japan Trend Shop. But are they worth it? Oh yeah!