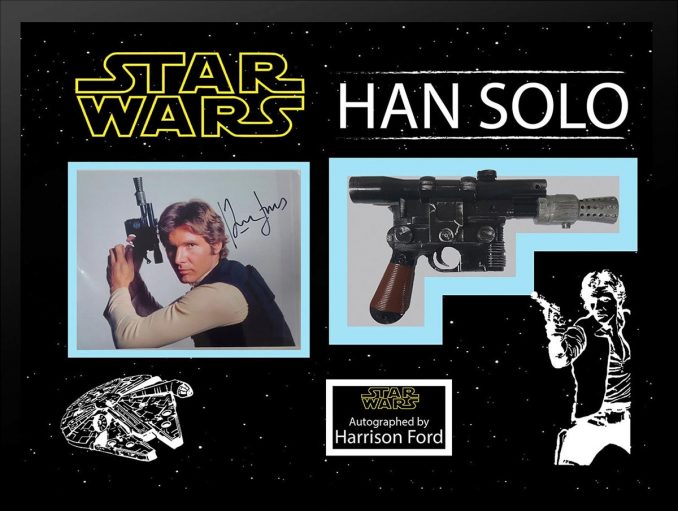 What can be better than a Deadpool Katana Signed by Ryan Reynolds? If you’re a Star Wars fan, then it would be this Han Solo Blaster Signed By Harrison Ford.

Unfortunately, the price is high and the details are scant. Here’s what it says:

They’ll love this gift. We know. This one-of-a-kind collectible is a shadow box collage of Han Solo’s blaster signed by Harrison Ford.

So it appears that this is a shadow box collage (measuring 31″ x 23″ x 6″) where the centerpiece is a Han Solo blaster replica that is signed by Harrison Ford. (Although the only signature visible in the picture is the one on the photo of Han Solo / Harrison Ford posing with the blaster.)

This Signed Han Solo Blaster costs $2,000. If you’re interested, today is the day to buy because of the 30% Off BoxLunch Sale. With an item this expensive, the 30% off translates into a savings of $600, dropping the price to $1,400. (When you consider that Han Solo’s “Return of the Jedi” blaster sold for $550,000 in an auction a few months ago, this is actually very cheap.)

If you want to save some money, check out this Authentic Han Solo Blaster Replica that isn’t autographed.

Wear this Star Wars Han Solos Blaster Stainless Steel Pendant Necklace and you will feel as if you have Han Solo with you. Or at least his trusty blaster. This pendant necklace includes a 30-inch chain and the blaster is nicely detailed stainless steel with […]