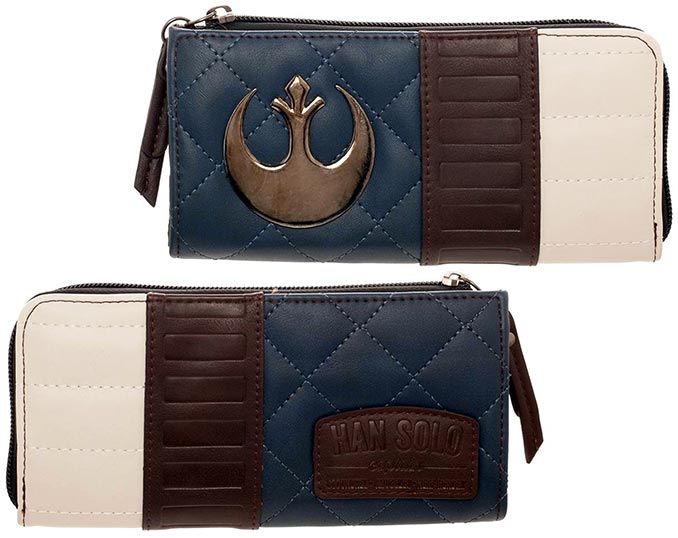 Looking for the perfect wallet to go with the Han Solo Hoth Handbag? You’ve got it with the Star Wars Han Solo Hoth Wallet. Just like that handbag, this wallet is inspired by the clothing worn by the dapper galactic smuggler known as Han Solo.

This Han Solo Hoth Wallet is officially licensed Star Wars merchandise and is constructed of faux leather. The outside features a Rebel Alliance Starbird insignia on one side, and on the other is a badge that reads “HAN SOLO” is large letters, “Captain” in the middle, and “Scoundrel – Smuggler – Nerf Herder” on the bottom. Open the L-zip closure, and inside you’ll find 8 card slots, 1 zipper coin pouch, and plenty of room for cash (either 2 bill slots or 4 money slots depending on the various descriptions.)

Han Solo would totally use this Star Wars Han Solo Zip Wallet to carry his smuggling profits. Featuring white, brown, and navy appliques that mimic his signature white shirt, quilted navy cargo vest, and brown weapons belt, it’s got a Han Solo applique tag and white Resistance badge for the reluctant rebel fighter. The interior folds out to reveal lots of slots for cards and cash.

This Han Solo Wallet is $29.99 at Fun.com. You can also find it at Jet.com and Overtstock.com. There’s plenty of other awesome wallets to choose from such as the R2-D2 and BB-8 Wallets, Star Wars Tattoo Print Wallet, BB-8 Clouds Wallet, Boba Fett Wallet, Rocket Raccoon Wallet, Wonder Woman Wallet, and GoT Mother of Dragons Wallet.

Like the awesome Satchel Bag and Wallet we saw before, this Han Solo Hoth Laptop Backpack is designed after the outfit Han Solo wore on the ice planet Hoth in the beginning of The Empire Strikes Back. (See those articles for some interesting trivia and […]

This Star Wars Han Solo Hoth Satchel Bag is obvious inspired by Han Solo’s gear worn on the ice planet Hoth in The Empire Strikes Back. (See picture below.) It features a navy quilted pattern with brown trim. On one side is a Rebel Alliance […]

This Star Wars Rebel Wallet isn’t the first Rebel Alliance bi-fold wallet. Previously we saw a cool one for X-Wing Pilots and last year there was another Rebel Badge Wallet that looked really nice. This one features a metal Rebel symbol on one side and […]

You’ve seen the Solo Movie and know how Han Solo won the Millennium Falcon in a thrilling game of Sabacc. Now you too can play this legendary game with the Star Wars Han Solo Sabacc Card Game. There’s a lot riding on the line, as […]

We’ve showcased some pretty snazzy wallets before, like the iWallet, Space Invaders Duct Tape Wallet, and Toast Wallet.  No ordinary wallets dare be seen on GeekAlerts! Here’s another “mighty” fine wallet that has earned its spot in the GA Spring wallet lineup. It’s extremely durable, comes in all different styles and colors, and it’s anything but […]

This Star Wars Rebel Badge Wallet is what every rebel should be carrying. It is made of grey, black, and brown vegan leather and looks great with the metal Rebel logo in the center of one of the halves. It will hold all of your […]