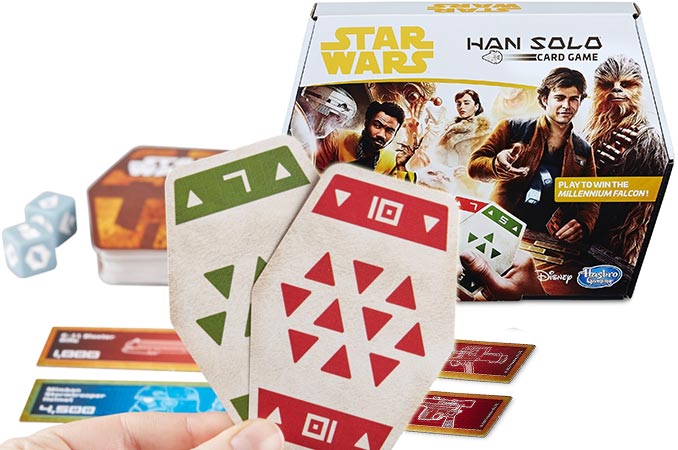 This Han Solo card game is based on the iconic card game from the Star Wars universe and featured in Solo: A Star Wars Story. In each round of the game, you can add or swap cards with the goal of scoring as close to zero as you can. To really shake things up, the game includes dice rolls. To win, which involves collecting valuable bounty tokens, the player must be willing to take some risks.

Included with the game are 62 cards, 24 cardboard bounty tokens, and a pair of dice.

The Han Solo Card Game is inspired by a legendary card game from the Star Wars universe! In this exciting game, players try to score as close to zero as they can with their cards. They can add or swap cards to improve their hand during each round, but rolling the dice and getting doubles will shake things up. At the end of a hand, the best score collects the most valuable bounty token. If you collect wisely, you can even steal the Millennium Falcon – the highest valued token. The player whose tokens add up to the highest value at the end of the game wins.

The best price on the Star Wars Han Solo Card Game currently is $15.99 + Free Shipping at Best Buy. You can also find it at Target, Hasbro, Shop Disney, Fun.com, and Entertainment Earth.

Solo: A Star Wars Story comes out tomorrow, but if Harrison Ford will always be the Han Solo for you, you need to feast your eyes on this Han Solo Millennium Falcon Porcelain Stein. Details abound, sure to satisfy any Han Solo fan. This Star […]