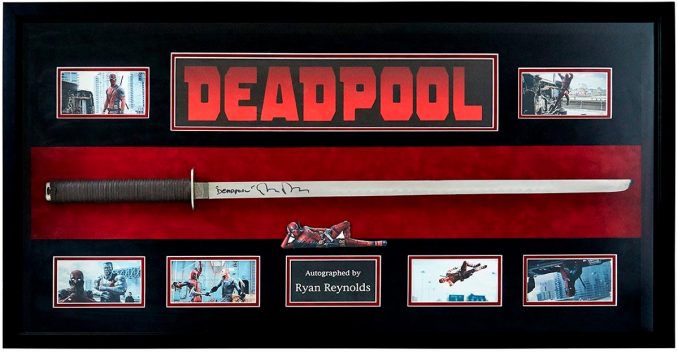 And three (I guess we’re still counting), this is mounted in archival framing with a velvet backdrop and UV protective glass complete with laser-cut graphics, etched nameplate, and photos. Four, it is a limited edition (and it isn’t like collectibles companies just throw that term around.) And finally, five, it comes with a Lifetime Certificate of Authenticity (and, no, you can’t just make one of those on a printer because it has a tamper-proof, numbered decal.)

This awesome signed katana by Deadpool (Ryan Reynolds) has been custom framed and mounted with laser-cut graphics, etched nameplate, and photos.

This Deadpool Signed Ryan Reynolds Katana is $1,299.90 at BoxLunch. You can also find it at Wayfair.com.

While the days of dragons, giants, and direwolves are gone, some people still follow Kings and Queens and everyone wants to lay claim to their own throne. But as the Game of Thrones series and A Song of Ice and Fire sage has shown us, […]

Mysterious and deadly, Tatsu Yamashiro prepares to strike as the Suicide Squad Katana Statue. Just like the sword she’s named after, Katana is very good at taking lives, using the blade that killed her husband to stop the bad guys. Unlike the other colorful characters […]