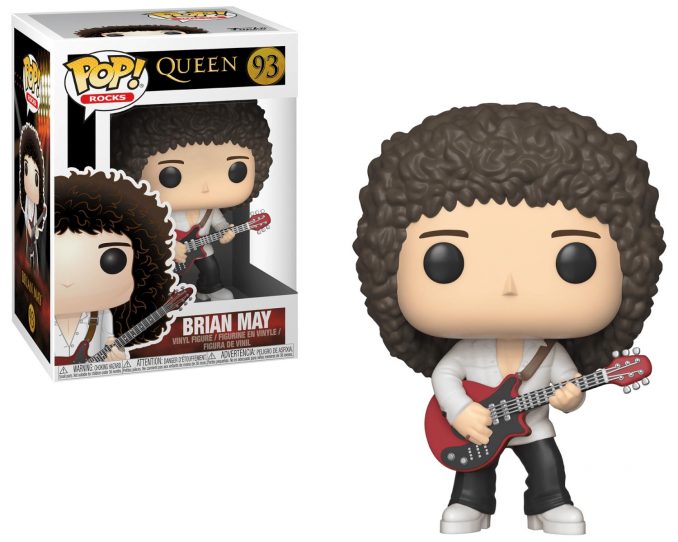 If you get that awesome Funko POP! Freddie Mercury, you’ll need to get this Funko POP! Rocks Queen Brian May Figure to go with it. You don’t want Freddie to be lonely, and certainly, his lead guitarist is indispensable.

While not quite as famous as Queen’s lead singer, Freddie Mercury, Brian May is still quite popular. He has been on many greatest guitarist lists, such as the “100 Greatest Guitarists of All Time” from Rolling Stone magazine. In a Guitar World magazine reader poll from 2012, he was ranked the 2nd greatest guitarist of all time. (Eddie Van Halen scored the #1 slot.) So whether you’re a fan of Queen or great guitarists in general, this Funko Pop! Rocks Queen #93 Brian May deserves a slot in your collection.

This Funko POP! Rocks Queen Brian May Figure is available for Pre-order at Entertainment Earth for a cost of $10.99. It is expected to ship in January 2019.

If you saw Bohemian Rhapsody, the new biographical film about the British rock band Queen, it may have put you in the mood to get this Funko POP! Rocks Queen Freddie Mercury Figure. It features Freddie Mercury from Queen in his iconic 1986 Wembley Stadium Outfit (white […]

ZIIIRO Mercury Watches are an impressive encore to the Ziiiro Gravity Watches with their beautiful minimalist design. ZIIIRO Mercury watches sport the same great watch watch face with a simple, yet unique, way of telling time. The difference is that the Mercury model has a […]