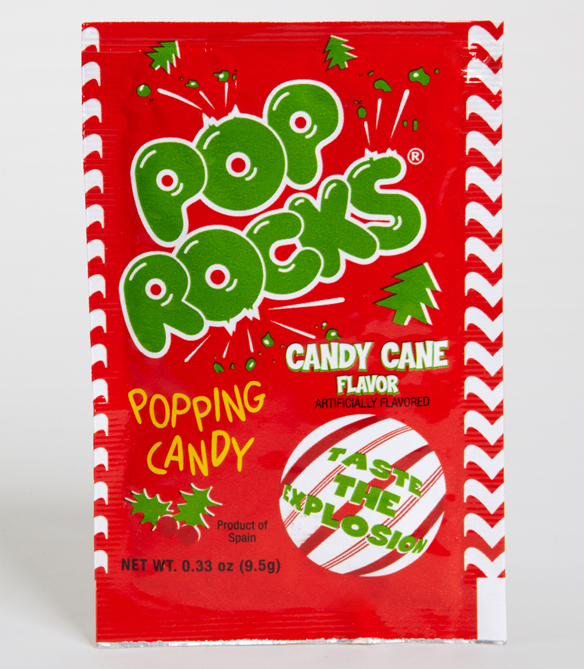 Peppermint candy canes – as good as they are, they lose their flair pretty quickly. But what about Candy Cane-Flavored Pop Rocks? 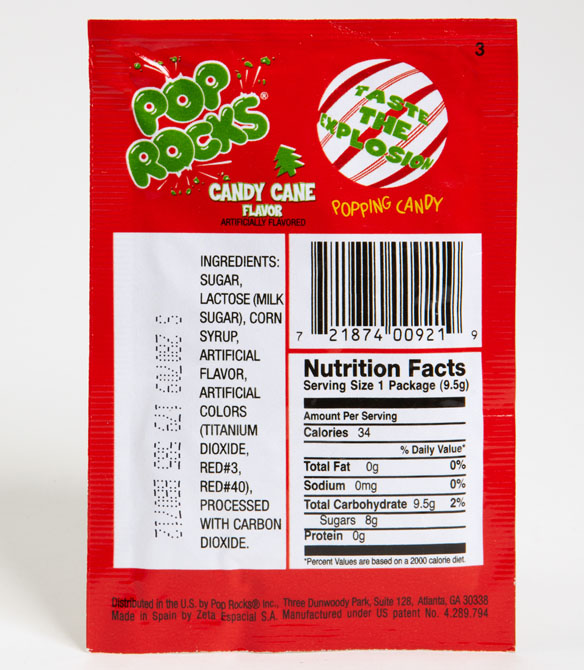 Are they science or are they magic? Either way, Pop Rocks are a perennial favorite year-round, and now the nostalgic candy gets a wintertime makeover. Candy Cane Pop Rocks feature the peppermint flavor of candy canes with the pop and fizz excitement they’re known for. One packet is 0.33 oz and measures 3″ x 4.5″

When I was a kid, there was an urban legend that eating Pop Rocks and drinking soda at once was deadly. Till this day, I’m still scared to mix the two. However, the show “Mythbusters” did the favor of running an experiment to test the notion by using a pig’s stomach, and ultimately the myth was busted. They did see the stomach swell but it didn’t explode after being filled with pop rocks and several cans of soda. If Pop Rocks are still out on the market and come in new flavors like Candy Cane, it’s safe to assume that the candy has stood the test of time and hasn’t killed any morons.

You can load up on Candy Cane Flavored Pop Rocks for the holidays at FredFlare, NeatoShop and PartyCity for $.95 – $3.

Christmas is coming. Make sure you are ready by picking up a box of these Bacon Candy Canes to hang on the tree next to your Bacon Christmas Ornament. They look just like regular candy canes with the traditional red and white stripes, but instead […]

Unless you really like peppermint, candy canes can be pretty boring. Sure, there are flavors like Bacon and Pickle available now, which are fun for us geeks, but they aren’t the type of thing you want to snack on frequently. However, these Jelly Belly Candy […]

Holidays are a time for fun and celebration with family and friends…and of course that usually means alcohol is involved. The peppermint flavored Candy Cane Shot Glass should be a big hit, as long as you enjoy candy and alcohol…What’s better than an edible shot […]

Chestnuts, turkey, sugar-plums… and wasabi? Christmas gets kicked up a notch or two with the Wasabi Candy Canes, guaranteeing that nobody in your family will ever look at innocent little peppermint sticks the same way again. By sight alone, these tricky bits of candy look […]