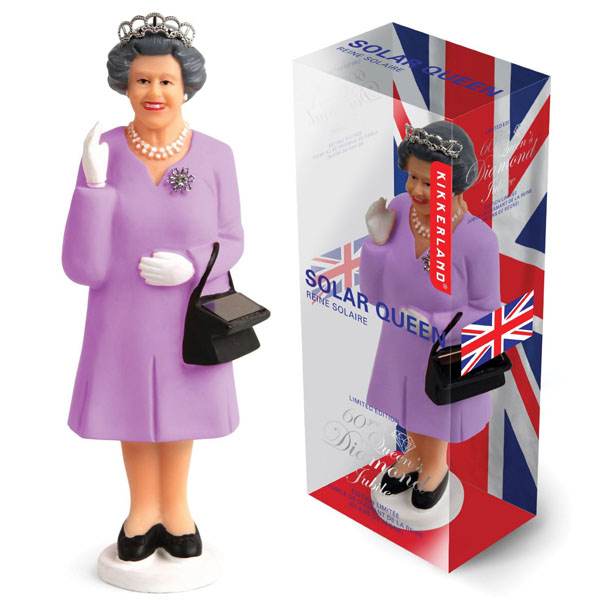 Congratulations to Queen Elizabeth II for her 60-year reign on the British throne. In honor of her service, Kikkerland has created a Limited Edition Jubilee Commemorative Solar Queen that waves when her purse is activated by light, just in time for the queen’s Diamond Jubilee.

Unique features on this particular solar queen toy are her ‘diamond’ broach, tiara, and the lilac color of her dress. There have been other versions of solar-powered Queen Elizabeth released by Kikkerland, but those models aren’t nearly as decorated and elegant as this one.

The queen’s hand waves just like her majesty’s does in real life. Let the queen greet passers-by from the top of your dashboard, at your desk, or in your front window. It’ll be good, clean, royal fun to see how many people will smile and wave back at her.

The Limited Edition Jubilee Commemorative Solar Queen is from $17.80 on Amazon.com and from £12.95 at Amazon.co.uk.

Will and Kate fans may enjoy sipping tea made from Kate and William Tea Bags, or perhaps collecting the Barbie Royal Wedding Will and Kate Set.

Backing up your data can be as serious as guarding the Queen. That’s why you need the armed and dangerous Queen’s Guard Driver USB Memory Stick to protect your most royal files. The last thing a Buckingham Palace soldier wants to be called is cute. But […]

She doesn’t get much love in the movies but the X-Men Jubilee Bishoujo Statue puts the spotlight on one of the brightest mutants to ever be listed on the X-Men roster. Jubilation ‘Jubilee’ Lee didn’t seem like much when she first appeared in the pages […]

Every adventure, no matter how grand, has to start somewhere, and the Doctor Who First Doctor Commemorative Edition Collector Figure brings us the man who stole the TARDIS… or who was stolen by the TARDIS, depending on who you believe. Dressed in his gentlemanly attire, […]