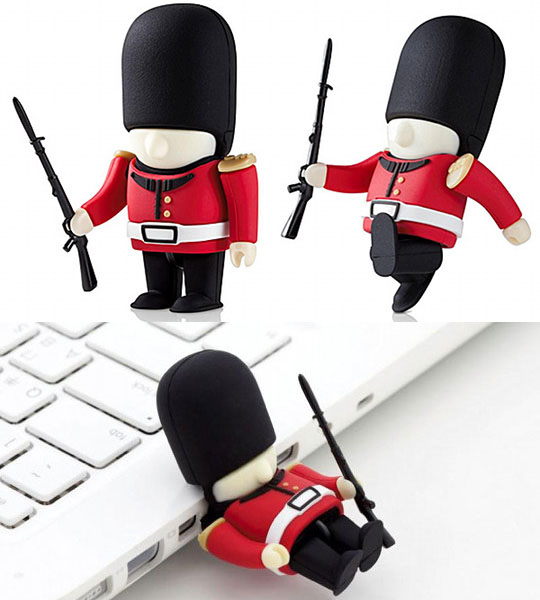 Backing up your data can be as serious as guarding the Queen. That’s why you need the armed and dangerous Queen’s Guard Driver USB Memory Stick to protect your most royal files.

The last thing a Buckingham Palace soldier wants to be called is cute. But when he’s shrunken down to memory stick size, you have to admit that he’s pretty darn cute. The way he plugs into your USB Port, which is through the back of his neck, makes it look like he’s taking a siesta on the job. 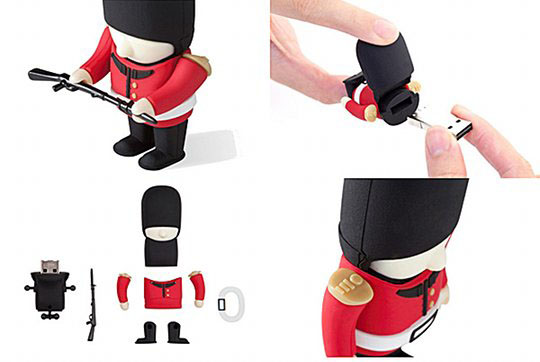 More than just a memory stick, the red-coat guard is also a stand-up figurine that you can play with when you’re bored. He doesn’t mind if you speak to him on duty. His rifle can fit into either hand, much like a weapon would fit into a Lego minifigure’s hand. Judging from the photos, you can also dissemble his arms and legs that are movable and bendable.

Surprisingly, the Queen’s Guard Driver USB Memory Stick can be found at the Japan Trend Shop. The 4GB version is $84 while the 8GB soldier is $90.

Maybe you remember the homemade retro car USB memory sticks from a couple of months ago. Here’s a fun and cute alternative to those muscle cars; the VW Beetle and Camper Van USB memory sticks.

At last here is a TARDIS gadget that really is larger on the inside. At least when you are talking about data storage. This TARDIS 4GB USB Storage Memory Stick will hold all of your valuable info while looking super geeky on your keychain. This […]