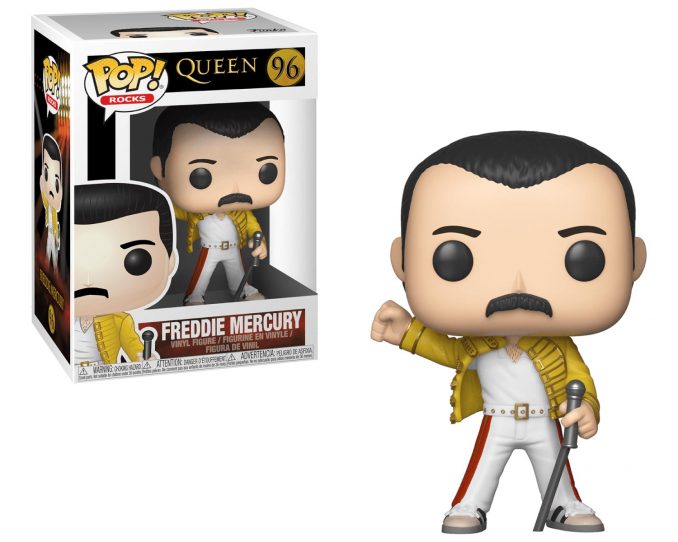 If you saw Bohemian Rhapsody, the new biographical film about the British rock band Queen, it may have put you in the mood to get this Funko POP! Rocks Queen Freddie Mercury Figure. It features Freddie Mercury from Queen in his iconic 1986 Wembley Stadium Outfit (white suit with vibrant yellow jacket.) It is Funk Pop! Rocks #96.

Relive the magic and wonder of the British rock band that gifted the world Bohemian Rhapsody, We Will Rock You, We Are the Champions and Another One Bites the Dust, among many other songs. If you were a fan of Queens 1986 performance at Wembley Stadium in London youll love the Freddie Mercury Pop! wearing Mercurys white suit and vibrant yellow jacket.

You can order the Queen Freddie Mercury Wembley 1986 Pop! Vinyl Figure for $10.99 at Entertainment Earth (where they apparently think his name is spelled “Freddy”). It is expected to ship in January 2019.

ZIIIRO Mercury Watches are an impressive encore to the Ziiiro Gravity Watches with their beautiful minimalist design. ZIIIRO Mercury watches sport the same great watch watch face with a simple, yet unique, way of telling time. The difference is that the Mercury model has a […]

Do you have a diehard sports fan in your family or a close friend that is?  If so, these Authentic Stadium Seat Cufflinks will definitely earn you some brownie points.  Maybe suck up to your boss a little bit and get him something special this […]

Teach your kids some interesting science about rocks with this Glow Rocks Science Kit. When learning is fun, kids actually learn and get smarter and stuff. This kit is recommended for kids age 6 and up. You get 4 minerals and each of them glows […]

The Marceline the Vampire Queen – Rock the Nightosphere LP is a must for Adventure Time fans. It features 7 fan-favorite tracks that you will be rocking out to all day. Sit back, relax and listen to some music based on your favorite vampire queen. […]

If you have a bar in your home, you no doubt want some cool and futuristic looking glasses to impress your friends. These Bormioli Rocco Cassiopea Rocks Glass Set will make your drinks even more appealing to your guests. You get a set of 4 […]

Does your dog have blonde ambition? Then let her dress up in this stunning Pop Queen Dog Costume to express herself. Pets are probably not allowed at Madonna’s concert venues, but perhaps she’d make an exception for one dressed in this get-up. The platinum-blonde, high-ponytailed […]