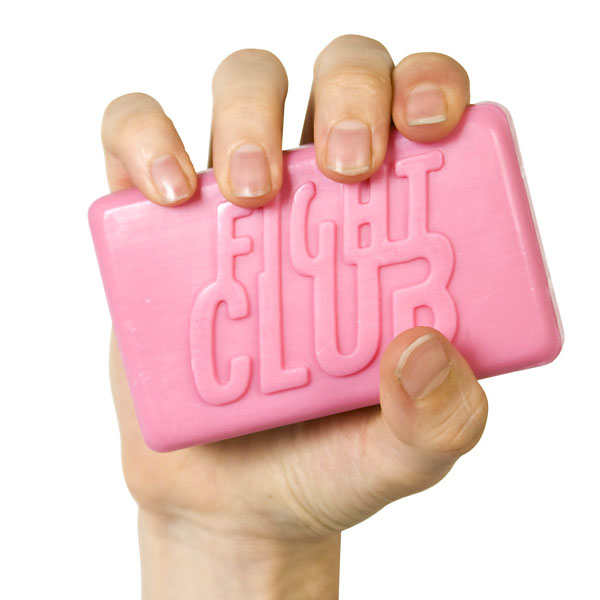 Everyone who’s seen Fight Club or has at least seen one of the movie’s posters will instantly recognize the Fight Club Soap. With an ultra-feminine pink color and the words “Fight Club” boldly featured on the soap’s face, fans will most likely be keeping this soap in their collections rather than use it for washing their hands.

It’s has a price tag that’s steeper than most of the other bars of soap you can find in the grocery store, but it’s fun to splurge in memorabilia once in a while, especially from movies that were able to make an impact on you (as it did to me.) For soap that you can actually use, check out the literal “Hand” Soap or the extremely disgusting Poop Soap.

So freshen up your ideas and maybe change your life with Fight Club Soap. Modeled on the iconic bar from the cult movie’s posters, this lurid pink bar is not – and we can’t stress this enough – made using stolen human fat. Sure, it may well be the richest, creamiest fat in the world but the labeling is a nightmare.

So instead, you can enjoy this lightly-scented, lipo-free equivalent with the only questionable ingredient being caffeine. That’s right; caffeine. It’s like a perfumed punch in the face, first thing in the morning and a great way to freshen up for a night on the tiles (or the floor of Lou’s basement).

Lab rat germophobes, have we got the soap for you. Wash up with a bar of Fluorescent Cyanobacteria Petri Dish Soap to feel fresh and radiant. Cleverly shaped and packaged as a bacterial culture in agar in a petri dish, the soap will glow and light […]

There’s a lot of hype about the serious green drink from Europe known as absinthe. Some people shy away from it for its reputation of being potent and deadly. But that doesn’t mean that they can’t still enjoy absinthe in the form of gumballs or wash their hands with Absinthe […]

Doesn’t the thought of bathing in a giant tub of snails just make you grin from ear to ear?  Baby, we’re having escargot tonight!  As you all probably know, there is a certain extract that can be taken from a white jade snail to do […]

We’ve seen bacon soap before on GeekAlerts, but the Marbled Bacon Soap takes a less radical approach to appealing to bacon-lovers. It may not be shaped like our favorite breakfast lunch and dinner, but it will have your bathroom smelling like bacon in no time. […]