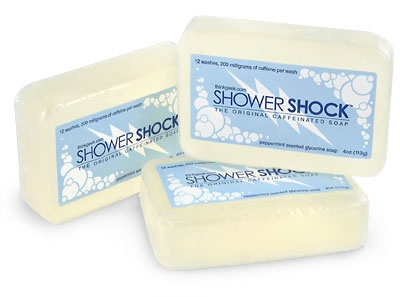 I find it harder and harder to get out of bed lately. Maybe because we just celebrated the holidays, or maybe it’s because I’m just getting lazier and lazier with each passing day. So if you’re like me and need more than just a cold shower to shock you to your senses early each morning, then give the Shower Shock Caffeinated Soap a whirl. Or should I say, a good lather.

The Shower Shock Caffeinated Soap contains actual caffeine that is absorbed by your skin. This means that you’ll get an early dose of caffeine even before your morning cup of coffee to make sure that you’re wide awake and ready to tackle your day by the time you reach the breakfast table. Other fun bars of soap to watch out for are the Fight Club Soap and Poop Soap.

Shower Shock is an all vegetable based glycerine soap which does *not* contain any harsh ingredients like ethanol, diethanolamine, polyethylene glycol or cocyl isethionate. So it’s a gently invigorating soap 😉 Scented with peppermint oil and infused with caffeine anhydrous, each bar of Shower shock contains approximately 12 servings/showers per 4 ounce bar with 200 milligrams of caffeine per serving. No, we’re not kidding and no you don’t eat it. Caffeine can be absorbed through the skin.

The Shower Shock Caffeinated Soap is available at ThinkGeek from $6.99.

I don’t think droids need to shower, but I do believe R2-D2 and C-3PO appreciate being cleaned and well lubricated. That being said, this R2-D2 Soap Shower Bar is really for the human fans of Star Wars. These vegetable based R2-D2 soap units are 3 […]

Brrr. It’s getting colder and pretty soon many of us will be experiencing the dark wrath of the daylight savings time change, aka “fall backwards.” Productivity will start to dwindle and we’ll all want to make like the bears and hibernate. But no, we must […]

Get molecular with your coffee consumption with the Caffeine Molecule Coffee Mug, and let that cup of java be as educational as it is invigorating. Coffee is the sweet, sweet nectar that starts the day for many of us, so it’s only proper that we […]

Do you want to be caffeinated, but don’t want to drink cup after cup of coffee? Of course you do. Just pop some of this 50 Cups of Coffee Tub o’ Caffeinated Candy and you will be flying high. Buzzed. Wired. Electric. Juiced. Just try […]

Everyone who’s seen Fight Club or has at least seen one of the movie’s posters will instantly recognize the Fight Club Soap. With an ultra-feminine pink color and the words “Fight Club” boldly featured on the soap’s face, fans will most likely be keeping this […]