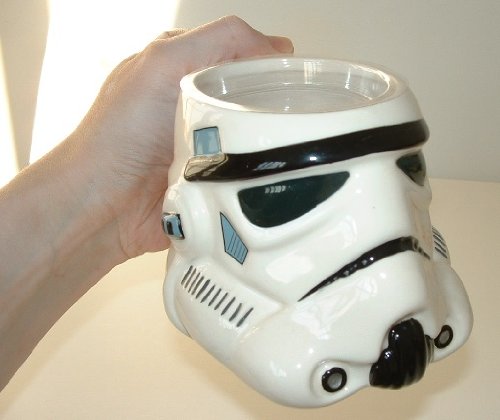 Now that’s a mug that only the Empire could love. This Star Wars Stormtrooper Ceramic Mug will make you feel like an Ewok drinking from a trophy Stormtroopers helmet.

This mug is modeled after the original Stormtroopers, not those lame Clone Troopers from the prequels. Pour your drink and make a toast to the Empire, the new Death Star or the fact that you are about to be stationed at Mos Eisley spaceport.

Are you ready to build a LEGO hive of scum and villainy? The LEGO Star Wars Mos Eisley Cantina Building Toy will let you do just that, by building Mos Eisley. Now you can recreate all of the cantina scenes and more from Star Wars […]

This Star Wars Mos Eisley Tie Bar is a great way to celebrate Figrin D’an and the Modal Nodes. Wear it to any hive of scum and villainy where they are playing. All of your Star Wars fan friends will be impressed.  It has all […]

How many toast-inspired objects have you seen out there? The GeekAlerts staff definitely knows a thing or two about getting toasted. For starters, we’ve given you a glimpse of Toasted Notes, a Toast Air Freshener, a Toast Wallet, USB Toast Hand Warmer, Mr. Toast Plush, Toast Playing Cards, and […]