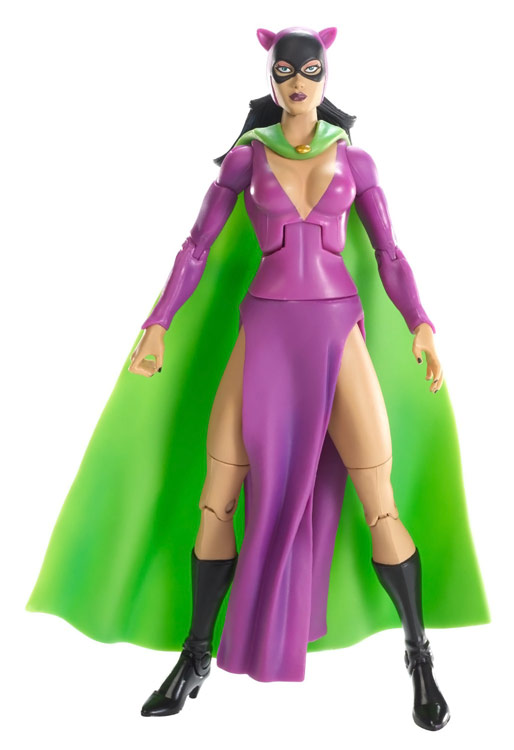 As the Batman Legacy First Appearance Catwoman Action Figure shows, Selina Kyle was a bit more colorful when she first appeared in the pages of the Batman comic books.

Newer fans of the feline femme fatale’s sleek, all-black look might be surprised to learn Gotham City’s most famous cat burglar used to have a real passion for purple… with just a hint of green thrown in. I don’t know who at DC comics decided it was a good idea for a cat burglar to wear a cape but I’m glad that accessory eventually went away.

The highly-detailed, 6-inch-tall action figure comes with a display stand and a 10 1/4-inch x 6 3/4-inch poster of a comic book cover in which Catwoman appeared.

The Batman Legacy First Appearance Catwoman Action Figure is available for $17.99 at Entertainment Earth and $12.95 at Amazon.com.

The DC Direct First Appearance: Series 1 Wonder Woman Action Figure reveals an Amazon that is decidedly less sexy-looking than the one we’re used to seeing but you have to give this retro-style hero a break because things were a lot different when she first […]

The release of Star Wars: The Force Awakens is still far, far away but this Darth’s Legacy T-Shirt lets you prepare for Episode VII now. Episode VII isn’t part of the official title of the new film but let’s face it; they’re going to have […]

Let a 1930s superhero rocket into your life with The Rocketeer 6-Inch Legacy Collection Action Figure. With heroes like Iron Man soaring through the air in a full suit of armor, I guess a flying guy with a fancy helmet and rocket jetpack just doesn’t […]