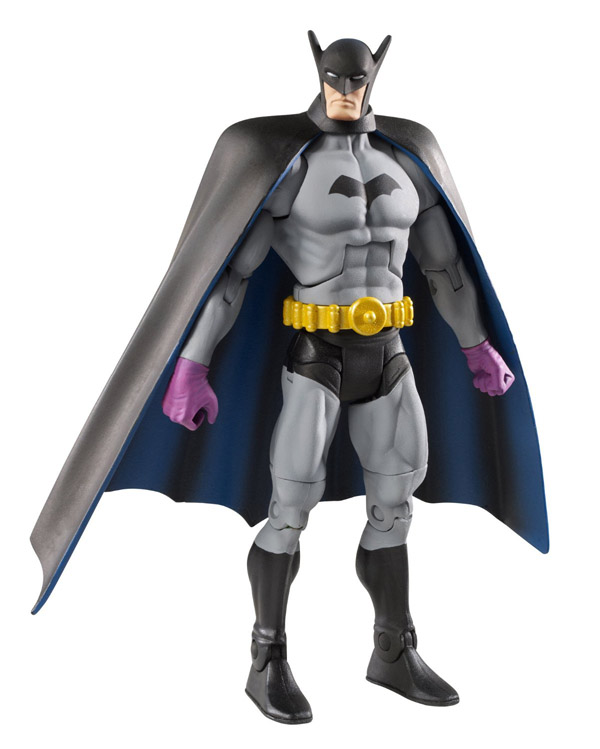 Batman fans will want to grab this action figure because the Batman Legacy 1st Appearance Batman Collector Figure because this version of the Dark Knight is about as retro as you can get.

The Batman Legacy line showcases popular characters from the Batman comic books through various incarnations, with this particular figure modeled on the grim vigilante’s first appearance. Apparently, way back in the old days, Bruce Wayne hadn’t figured out the advantage of coordinating colors so he’s sporting a snazzy pair of purple gloves that seriously stand out from the rest of his outfit. Also, the iconic wrist gauntlets are absent and his cape is missing the scalloped edges that are considered a standard part of Batman’s costume these days.

Standing 6-inches tall, the figure comes with a display stand and a mini collector poster.

The Batman Legacy 1st Appearance Batman Collector Figure is available for $15.90 at Amazon.com.

Get ready to swing into the past with the caped crusader as the Batman Black and White 1st Appearance by Bob Kane Action Figure offers the same look that comic readers saw so many years ago when they first laid eyes on the Dark Knight. […]

The release of Star Wars: The Force Awakens is still far, far away but this Darth’s Legacy T-Shirt lets you prepare for Episode VII now. Episode VII isn’t part of the official title of the new film but let’s face it; they’re going to have […]

Take a look at the first Avenger through the years with the Captain America Legacy Premium Art Print. Steve Rogers AKA Captain America has been fighting the good fight for a very long time. Sure, he took an ice nap for a little while but […]

The Doctor Who 1st Doctor 1:6 Scale Action Figure is a must for any Doctor Who collection. This is the Doctor that started it all. Outfitted in flamboyant gentleman’s attire, including a cape and Astrakahn hat, the First Doctor comes with several accessories including his […]