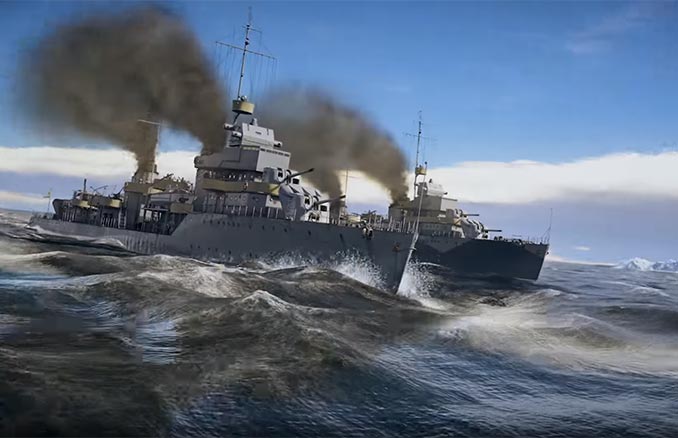 If you like massively multiplayer military battles, you may have already discovered War Thunder. It features over 800 of historically accurate planes and ground vehicles with a heavy focus on World War II era hardware. Now they’re finishing up their major addition of sea to their land and air battles, and you can preview some real-time gameplay footage of it in this War Thunder: Naval Forces Fleet CBT Trailer. This video also served as an announcement that CBT (Closed Beta Testing) for Naval Forces is now available on all platforms.

Speaking of all platforms, War Thunder developer Gaijin also just released early access starter bundles for the Xbox One. Since the game is already available on PC, PlayStation 4, Mac, and Linux, they have all major modern platforms covered.

The much anticipated time has come — Naval closed testing on all gaming platforms!

The CBT of Naval forces is available in special events “Naval battles” (Events and tournaments tab). If there is a technical requirement, fleet testing may be temporarily suspended to correct errors or add new content.

Access to closed beta testing is accessed by PC and PlayStation®4 owners of “Naval Packs”, as well as all participants of early testing on Xbox One.

You can get access to Closed Beta by buying one of the early release packs with the recently announced premium destroyers – The USS Cowell (USA) or the Karl Galster (Germany). In the future, we plan to invite new participants from the list of players who previously applied for the fleet testing.

Learn more about the game by watching the War Thunder Universe release trailer from Gaijin:

War Thunder is a free-to-play, cross-platform, massively multiplayer military masterpiece for PC, PS4, Mac, Linux and Android with millions of fans worldwide, that allows players to fight their way across Land, Air and Sea with access to more than 800 historically accurate planes and armored vehicles from WWII and Cold War Era.

War Thunder offers a highly detailed and personalized military aviation and land battle experience, giving players access to hundreds of models of aircraft with detailed cockpits, ground vehicles with awesome firepower, flying and driving skills that can be honed and improved with each mission. Thanks to the game’s painstaking attention to detail, you’ll truly feel like a World War II warrior in the air and on land as you plunge into battle.

You won’t find better protection for your data than this handsome Naval Ship USB Flash Drive. At first glance, the naval ship looks like it might be a limited edition Battleship gamepiece or a collectible figurine. But take off the stern and surprise! The boat […]