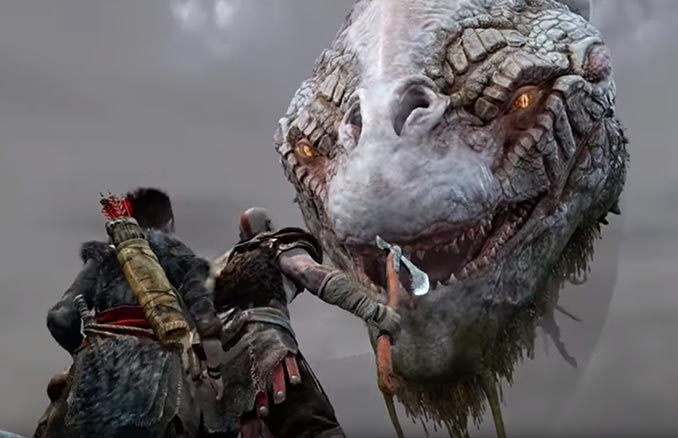 View the God of War: The Norse World – Countdown to Launch Trailer, to see background on the mythology in the new PlayStation exclusive that will launch on April 20. You can pre-order now (see below) and get it by the release date. This reimagining of God of War is winning rave reviews as it has successfully updated the core elements that made the series so successful: breathtaking scale, satisfying combat, and a powerful narrative.

View the God of War: The Norse World Trailer here:

God of War thrusts Kratos in a brand new realm filled with a new mythology. Learn why game director Cory Barlog decided to leave the Greek realm behind, and what attracted him to new mythos.

See the first Countdown to Launch trailer with gameplay footage:

If you haven’t seen it yet, here is the God of War Story Trailer:

From Santa Monica Studio and creative director Cory Barlog comes a new beginning for one of gaming’s most recognizable icons. Living as a man outside the shadow of the gods, Kratos must adapt to unfamiliar lands, unexpected threats, and a second chance at being a father. Together with his son Atreus, the pair will venture into the brutal Norse wilds and fight to fulfill a deeply personal quest.

You can pre-order God of War for PlayStation 4 from Best Buy and get it by release (Friday, April 20, 2018.) You also get a pre-order bonus of 3 shield skins for in-game. Other pre-order options at BestBuy.com are the Stone Mason Edition, Collector’s Edition, or God of War Limited Edition Console Bundle.

Note: The game is called God of War, which can be confusing so it is generally referred to as God of War 4 (it is the sequel to 2010’s God of War III) or God of War PS4 (it is a PlayStation 4 exclusive). Technically, it is the eighth installment of the God of War series.

Forget about Christmas because this December brings something extra special – the end of the world!!! The Mayan Countdown Clock will help you keep track of our impending doom by counting down to the final seconds of life as we currently know it. The clock […]

End of the World Countdown Timer

Every time one of these lone nut jobs or organizations predict the end of the world, it of course always turns out that they were wrong. But if fools predict it often enough, who knows, it may happen.(Yeah right.) Now you can count along to […]