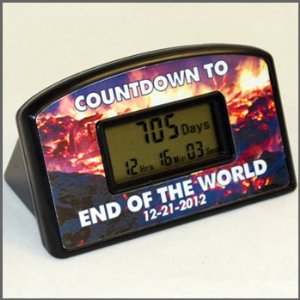 Every time one of these lone nut jobs or organizations predict the end of the world, it of course always turns out that they were wrong. But if fools predict it often enough, who knows, it may happen.(Yeah right.) Now you can count along to the end of the world with the End of the World Countdown Timer.

One of the better known dates that crackpots and smokers of certain herbs have predicted for the end is December 21st 2012. You might as well know how many days are left until the end, when these people are forced to wake up and smell reality.

Some believe that the Mayans predicted this doomsday date, while others believe that it was invented just to sell countdown clocks centuries later. Whatever is really going on with this phenomenon, why not count along? It will only cost you $9.99 from Amazon.

Forget about Christmas because this December brings something extra special – the end of the world!!! The Mayan Countdown Clock will help you keep track of our impending doom by counting down to the final seconds of life as we currently know it. The clock […]

So you finally took the leap and are counting down to your big day when you tie the knot. This Wedding Countdown Timer will help you count the days until you are fitted with ball and chain. You can count down the hours, minutes and […]

You ever have one of those days where you just wish you could push a button and reset the entire day, maybe even the entire week?  The USB Doomsday Device Hub gives you that little release of tension when you need it most.  Flip the […]

The D-Day Count Down Clock helps you keep track of days you need to remember by displaying that important date on a digital countdown. Simply add the date of the special day, and the number of of days before the event occurs is then shown […]

If you’re like a young Luke Skywalker, stuck doing chores, but wishing you could be out shooting womp rats, then maybe a quick pep talk from the Star Wars Talking Alarm Clocks will get you moving on time. Available as C-3PO, Chewbacca or a Stormtrooper, […]