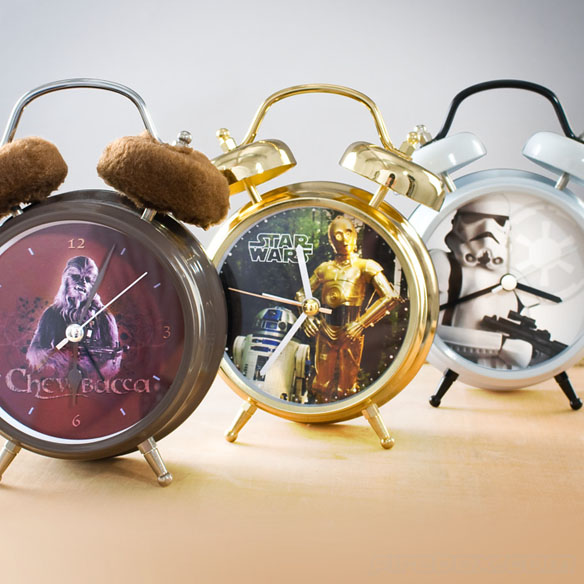 If you’re like a young Luke Skywalker, stuck doing chores, but wishing you could be out shooting womp rats, then maybe a quick pep talk from the Star Wars Talking Alarm Clocks will get you moving on time.

Available as C-3PO, Chewbacca or a Stormtrooper, each clock has its own realistic sound effects that will have you wondering whether you’re still dreaming or not. As you’ll notice right away, each clock does its best to resemble the character it is supposed to depict from the Star Wars Saga without deviating from the classical “twin-bell” style. Chewie has fluffy styled ear covers on the bells, giving it that added Wookiee touch. 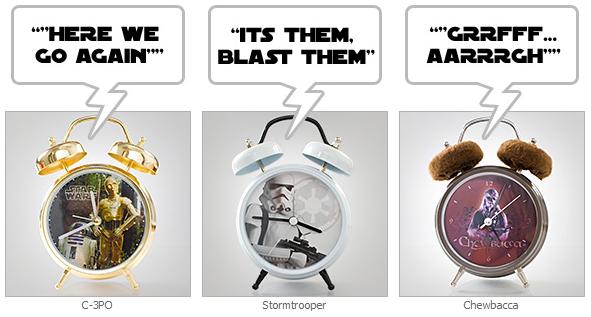 Get a wake-up call from a certain punctilious, golden protocol droid, a call to arms from the most efficient white-armored soldiers in the Empire, or just roll out of bed to the dulcet tones of our favorite, unintelligible Wookiee. With individual styling and a durable enamel finish, plus a good sized internal speaker, the force is strong in these clocks. Go back to sleep you shan’t.

A quick audio demo of the various alarm sounds is available at Firebox.com, where you can purchase the Star Wars Talking Alarm Clocks for $31.29…Chewbacca and the Stormtrooper are pre-order items.

If you’re a fan of the iconic Star Wars franchise, then I believe there’s no need to introduce you to this character. Famous for the following line, Yoda has become something short of an icon in the world of geekdom: May the force be with […]

If you enjoy being jolted awake to the sounds of ticking timebombs, the Dynamite Alarm Clock is exactly what you need to jumpstart the day. Before you know it, you’ll want to beat the clock before it blows up so that you can save yourself, your home and the neighbors for […]