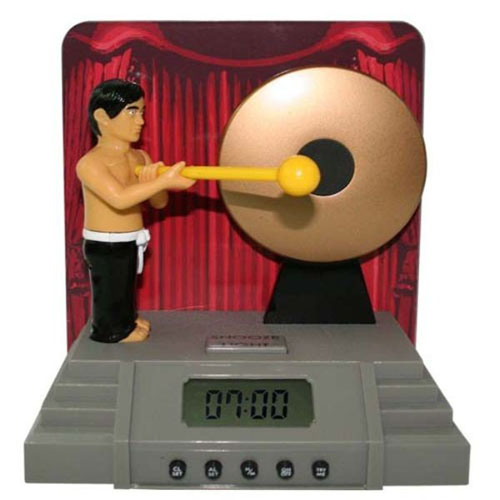 Everyone wants to wake up to the sound of a gong, which is why there’s such thing as the Gong Alarm Clock.

My current clock only has nature sounds on it, which is very soothing. Only problem is, nature sounds don’t startle you enough to jolt out of bed. In fact, they make you fall back into a deep slumber. An alarm clock should be alarming, and the Gong Alarm Clock will produce a distinct sound that’ll shake you up and karate chop your brain into consciousness.

There’s a shirtless man on the alarm clock whose sole purpose is to strike the gong when told. He’s standing on what looks to be a gong show stage; fancy red curtains in the backdrop and all. Let’s face it. Life is a gong show, so you might as well start it off right.

If you’re looking for interactive alarm clocks, here are some goodies: the Laser Target Alarm Clock, Tocky the Runaway Alarm Clock, and Clocky, the Alarm Clock on Wheels.

Do you know anyone who owns a real gong? I don’t know a soul who owns one, but I think a gong would come in extra handy in loud households or to get the attention of family members with selective hearing. The Sheng Kwong Metal Gong […]

Sometimes a stern look or sharp tone just doesn’t do the trick. Let everyone know you mean business with the Executive Desk Gong. Know what makes judges seem so powerful? The gavel. That little wooden hammer smacks down on the desk, and you know the […]