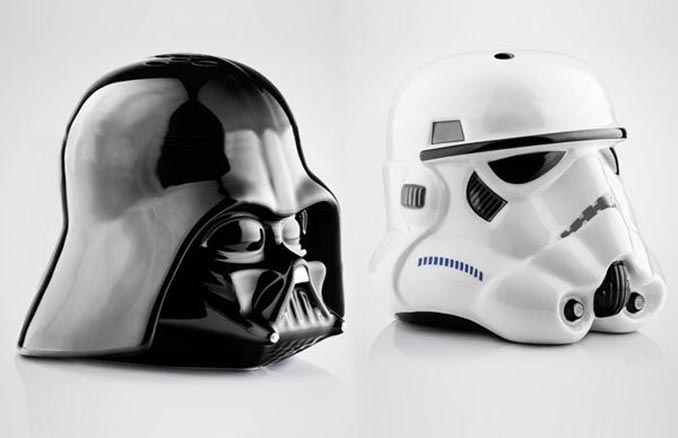 Bring a taste of the original trilogy to your dinner table with the Star Wars Empire Salt & Pepper Shakers. Your spouse might have a thing about “clutter” and may not think you need all the Star Wars stuff that you want. However, you need salt & pepper shakers, so why not go with these awesome Stormtrooper and Darth Vader ceramic cruets? With a mainly white stormtrooper and an all black Darth Vader, it is easy to know which shaker is salt, and which is pepper. 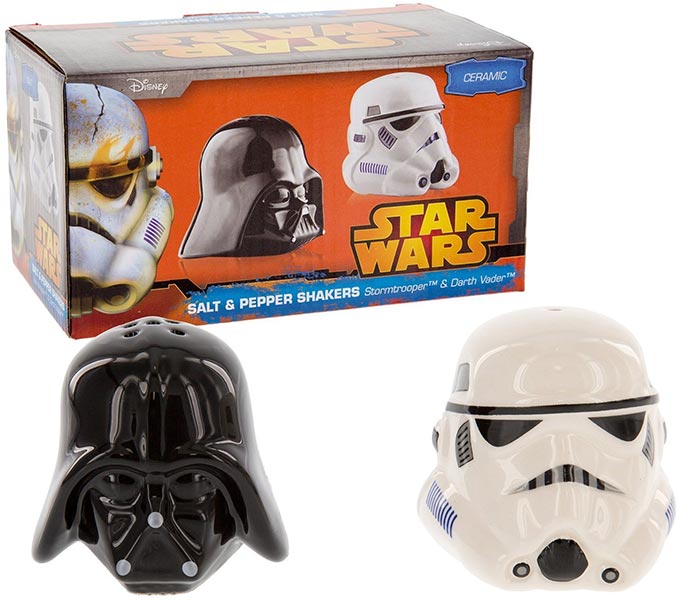 Nothing complements a meal like the right wine, some gentle music and the subtle threat of galactic tyranny. Which is why we dress our table with Star Wars Empire Salt and Pepper Shakers.

Beautifully crafted and officially licensed, these glazed ceramic cruets make a great Star Wars gift for geeks or original trilogy fans. Simply turn them upside down to dispense salt or pepper – no fancy grinding needed. Just like they did it in ’77.

Just because you weren’t lucky enough to attend the Star Wars Celebration VI at the Orange County Convention Center, that doesn’t mean you need to miss out on all the cool items that were exclusive to the show at that time. GeekAlerts has already shown […]

There are many things that can give you a taste explosion, like hot sauce for instance, but these Taste Explosion Salt and Pepper shakers are not so hard on your senses.

You probably figured it out by now; we use a lot of salt & pepper at GeekAlerts.  We’ve shown you so many varieties of shakers, I think I’ve lost track of them all…Alien, Grenades, Avocado, D Battery, just to name a few.  The Salt & […]

These Alien Pickers Salt & Pepper Shakers are out of this world. No, not Alien Pickers as in aliens who drive around looking for antiques. Pickers as in, these aliens like to pick their nose and their butt. These glazed ceramic salt and pepper shakers […]