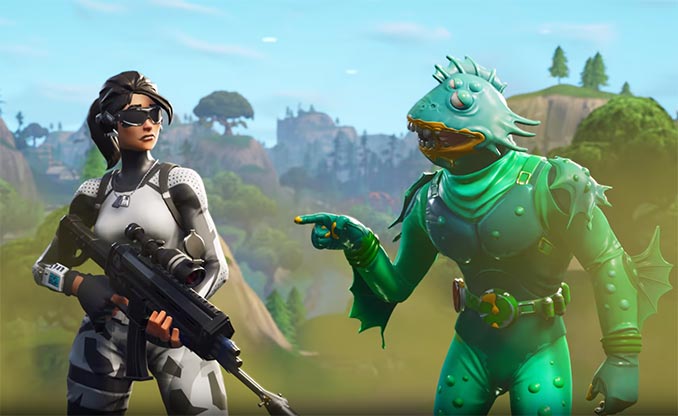 As part of the V4.4 Content Update that just came out, Fortnite Added Stink Bombs. They also released a quick funny little video (watch below) to introduce it. These are now live and you can find them in Battle Royale.

Stink Bombs are Epic rarity and can be found from floor loot, chests, and vending machines. They release a stinky cloud with  a 9-second duration that does 5 damage every half-second withing the cloud.

Pass the gas! The Stink Bomb is now live, find it in-game!

Fortnite Season 4 is here, and Epic Games has released a Fortnite Season 4 Trailer to announce the update to everyone’s favorite battle royale video game. With the Season 4 Battle Pass there are 100 tiers of new rewards including sprays, emotes, and cosmetic items. […]

Zelda fans will love this handmade Zelda Bomb Bag with 3 Blue Bombs. The roughly 6 inches tall, the blue bombs are crocheted with soft acrylic yarns and stuffed with polyfill. The perfect size to carry and throw at your Nintendo loving friends and family. […]

It’s time to get seriously stinky with your plan to lose weight, and that means whipping out the Stink Yourself Slim Spray. Forget about willpower and focus on nosepower to shed the pounds, with a spray that’s called ‘the world’s first malodorant aid to weight […]

As if you needed another reason to play the #1 completely free 100-player PvP battle royale, Epic Games has released a Fortnite Infinity Gauntlet Limited Time Mashup! This Avengers: Infinity War / Fortnite mashup is available through the V4.1 patch. Players drop in hunt for […]

Fortnite Added Shopping Carts, so now you can pull off crazy stunts while you race across the map in a shopping cart. Recreate scenes out of Jackass or stunts from your misspent youth without risking life or limb (your real life or limbs, as your […]

If the Love Duck Radio feels a little bit too cute for your bathroom accessory taste, maybe you want to try out this brand new set of fun bath bombs instead.

Planting plants is the bomb! No really it is. Seed Bombs Throw and Grow Plants let you throw a seed bomb in some dirt and within 6 weeks you’ll have beautiful plants. You just made the world a nicer place. With bombs no less. You […]