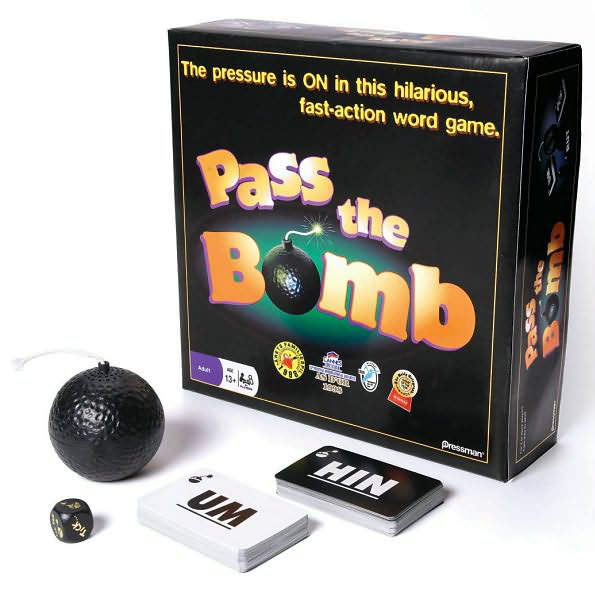 Put some life into the party by playing a round of Pass The Bomb. Contrary to the name of the game, it isn’t a violent game nor does it involve any real bombs. It comes instead with a fake bomb that players pass on to one another. When the bomb explodes, the player who’s holding it must collect the card.

The goal in the Pass The Bomb Game is to have the least number of cards at the end of each round. So if you’re looking for a fun word game that’s also got a little bit of action, then this is definitely the one for you.

Check out the Pass the Pigs Pig Party Edition Game, the Fact or Crap Game, and Conversation Games for more game choices.

The pressure is ON in this fast-action word game. The player who’s holding the bomb when it blows collects the card. After 13 cards have been used, the player with the fewest cards wins.

The Pass The Bomb Game is available from Amazon for $18.48.

Slicey The Pig Dashboard Wiggler is a product for all of us bacon-loving geeks who were waiting for something that would give us nightmares for weeks.  Bacon Rugs?  Not very scary.  Comfortable, yes, but not frightening.  Slicey the Pig?  I’m going to wake up screaming […]

There’s never a dull moment with the Electronic Catch Phrase Game. Just gather your friends around, turn the game on, and get ready for a fast-paced gaming experience. It’s highly interactive and will provide you and your friends with hours of entertainment. It’s definitely a […]