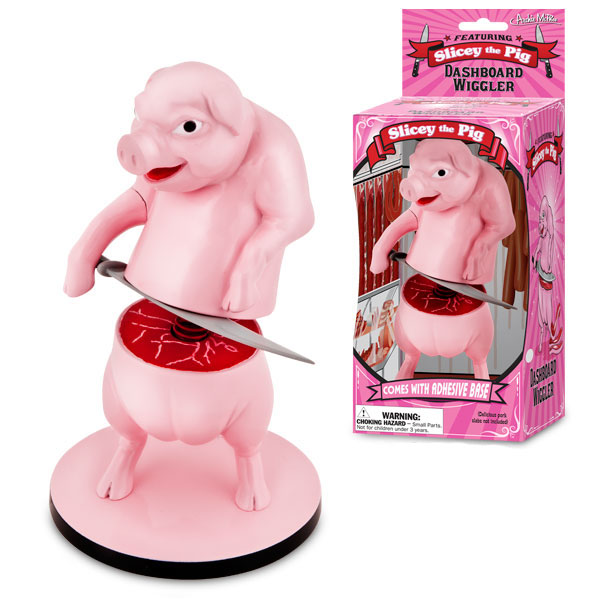 Slicey The Pig Dashboard Wiggler is a product for all of us bacon-loving geeks who were waiting for something that would give us nightmares for weeks.  Bacon Rugs?  Not very scary.  Comfortable, yes, but not frightening.  Slicey the Pig?  I’m going to wake up screaming for at least a couple of weeks – sure, he’s just trying to live out the ideal of “sharing,” but this time… this time they’ve gone too far.  It’s time we rebelled against the classroom moms and their “sharing” nonsense.  WHO’S WITH ME?  *Infants all raise their weapons*

Slicey the Pig realizes that we would all enjoy eating him, and he is merely helping us out.  The only thing better than bacon?  Pigs that turn themselves into bacon for you.  Really, this is an excellent business model.  We do absolutely nothing, and the pigs turn each other into delicious meat.  No labor cost – the only liability we have is Bill, who keeps eating the pigs whole before they can turn themselves into food.  *Bill eats an entire animal*

Slicey The Pig Dashboard Wiggler
Slicey the Pig just realized how delicious he is and now he wants to share himself with you! Taken from an old French advertisement, this vinyl pig holds a large carving knife to his own mid-section while he grins maniacally.

If you want to put this little creep on your dashboard, then jump on over to Entertainment Earth or Archie McPhee and pick it up for just $8.  If you would rather not deal with the destruction of your fragile psyche, shield your eyes and walk towards the Bacon Peanut Brittles and the You Had Me At Bacon T-Shirt once you’ve processed the glare of Slicey.

Sometimes the simplest things can become the creepiest after they’ve been merged together. The Creepy Horse Man Dashboard Wiggler is a perfect example because this guy is about as creepy as you can get. He’s even wearing a business suit but that doesn’t help; as […]