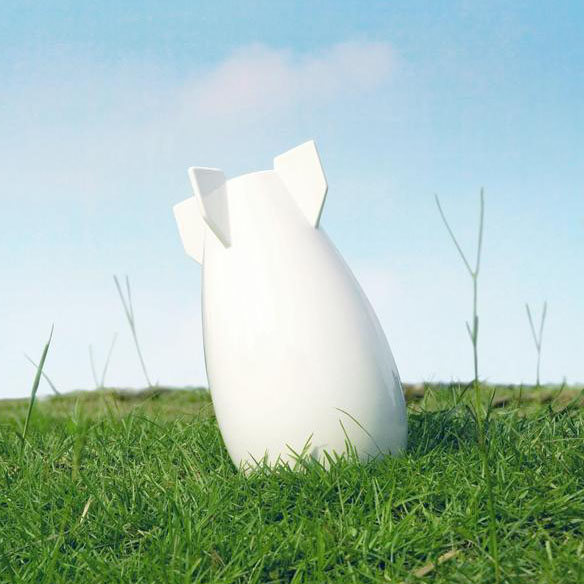 Bombs away! But don’t expect any explosions if you’re using the MollaSpace Peaceful Bomb Vase; you’ll probably hear the crash when it breaks, but other than that, there’s no need to worry or find a safe place to hide. The Peaceful Bomb Vase is a torpedo-shaped vase that was designed to remind the world of life and peace instead of destruction.

You might be wondering why the MollaSpace Peaceful Bomb Vase is described as being a peaceful vase, when it was made to look like a bomb. Just look at the bottom of the vase, and you’ll see a huge peace sign imprinted on it and this vase promotes growth and gentle things like flowers instead of destruction.

For obvious reasons, the Peaceful Bomb Vase kind of reminds me of the Gun Flower Vase and Flower Grenades.

You won’t hear the deafening explosion when this Peaceful Bomb is placed, nor the devastation after the explosion. Instead, you’ll see flowers and plants which are full of life to bring peace to its surroundings.

The MollaSpace Peaceful Bomb Vase is available from Amazon for $52.

It’s a relief that two genders exist when it comes to humans, animals and even plants. Imagine living in a world with just one gender. It wouldn’t be pretty. The Un Homme/Une Femme Vases are a nice home accent celebrating the dichotomy of men and women. Flowers […]

Goldfish are so elegant and glamorous; no wonder they’re such popular pets. I guess it’s pretty easy to walk out of the pet store having only spent $0.17 and gaining a little friend to call your own. Many fish owners have learned one way or another that goldfish in particular can […]

If you like multi-functional clocks like the Facinations USB Desktop Aquarium, you’re going to love this Peaceful Progression Alarm Clock. It looks like a light-up box cheese grater or a cool piece of Star Wars architecture, but it’s a trifecta of aromatherapy, nature sounds, and calm […]

Rooftop terraces are the place to be when the sun goes up, and even when the sun goes down. Even though it might not be possible to escape to a posh rooftop lounge right away, this Mansion Planter could serve as a little piece of architectural eye candy […]