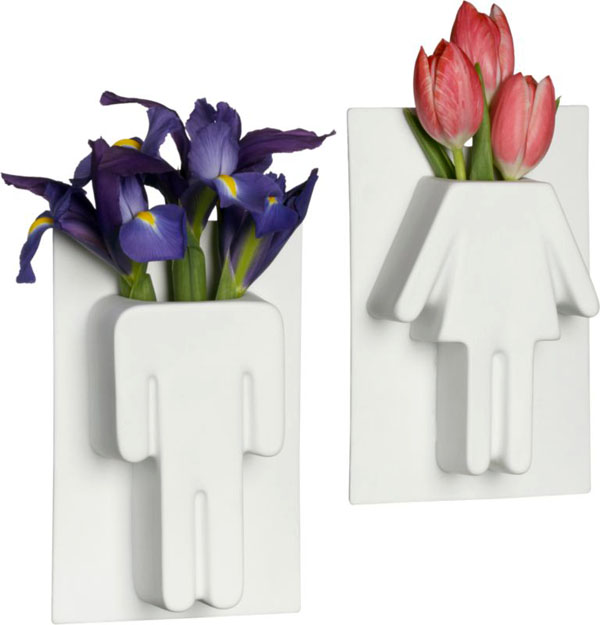 It’s a relief that two genders exist when it comes to humans, animals and even plants. Imagine living in a world with just one gender. It wouldn’t be pretty. The Un Homme/Une Femme Vases are a nice home accent celebrating the dichotomy of men and women.

Flowers that you put in the vases will look like the figures’ heads and will give them instant personality. Creative minds might start visualizing faces within the flowers. Any type of flower will look stunning against the vases’ white background.

You could install a vase outside a restroom door to indicate which loo is meant for whom. People waiting their turn in line will appreciate staring at something other than a blank door.

Or you could buy several of the vases and line them up in a row to throw in a little drama. Just like in any setting, throw a bunch of men and women together and you’ve got yourself an entertaining reality show.

The Un Homme/Une Femme Vases are on sale for only $3.95 US each at CB2, so don’t be shy about populating your abode.

Goldfish are so elegant and glamorous; no wonder they’re such popular pets. I guess it’s pretty easy to walk out of the pet store having only spent $0.17 and gaining a little friend to call your own. Many fish owners have learned one way or another that goldfish in particular can […]

If mom is a geek, surprise her on Mother’s Day with the 8-Bit Flower Bouquet. Most mom’s won’t appreciate the retro-gaming 8-bit pixelated flowers, but remember that if you have kids you also need to have a present for your wife (or baby-mama if you […]

If you’re anything like me, you have trouble keeping plants alive. This USB Flower Pot is perfect for those that lack a green thumb but still want want to beautify their work environment with a live plant. Through a USB interface to your computer along […]

We were pretty wowed by the Williams-Sonoma Blooming Flower Pot Cake which we featured last year. But as you may have discovered it does cost a pretty penny or two. Another option that would achieve a similar effect is to make your own flower pot cakes when […]

These Flower Grenades were originally designed for adding some flowers to urban areas that needed some beautification, but we think you can have a lot of fun with them no matter where you live.  Enjoy tossing these out the window or in the corner of […]