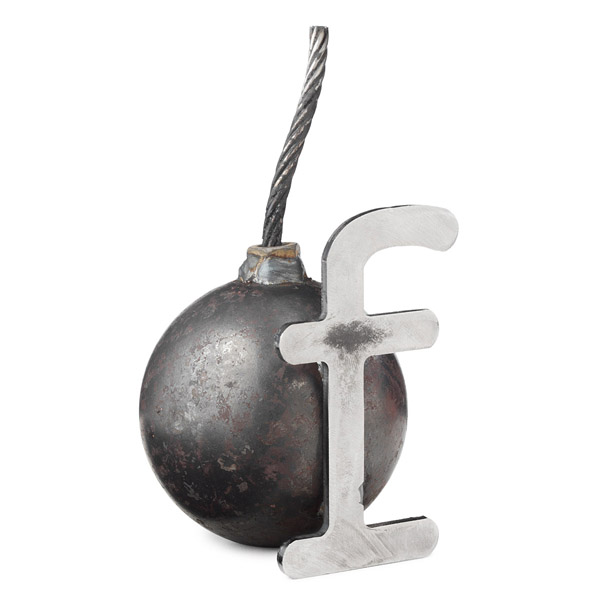 Know anyone that has real skill with dropping the F bomb? It’s frequently an over-looked, and occasionally frowned-upon, talent, but you can shine a light on your friend’s mad skills by honoring him (or her) with the F Bomb Paperweight.

The F bomb has to be one of the most versatile words in the English language. It can be used to express anger, fear, pain, or shock, and it’s almost always guaranteed to get attention. Stuck in a room filled with non-stop chatter and need to get someone to notice you? Just drop the F bomb and all eyes will be on you. Of course, you’ll also get attention if you drop this particular F bomb because it’s a metal ball that weighs over 24 ounces. Don’t drop it on your foot or you’ll be dropping the other F bomb too.

Celebrate a friend’s mastery over the infamous word of power or go ahead and recognize your own skill with colorful language with the F Bomb Paperweight for $45.00 from Uncommon Goods.

Since baseball season is in full swing, the “Safe” Paperweight is a clever way to keep your ballgame tickets and stacks of paper safe from flying away. Made to look as if a young little leaguer is sliding on his belly to reach base, the paperweight captures […]

Hey small business owners, do your part and give someone a job. Hire this Zombie Paperweight to keep guard of all your precious office documents. Since he has no arms or legs, I’m sure you’ll find him quite accommodating; just don’t put your fingers too […]

It’s tough living through a zombie apocalypse. There’s the constant headshots, running, and there’s that constant feeling that Zombies are watching you. Well, now you have good reason to feel that way with this Zombie Eye Paperweight. Use it to keep important papers all in […]

Working at a desk all day can be tedious and sometimes you need fun inconspicuous pick-me-ups to play with. GeekAlerts has shown you things like the Road Sweeper and Zamboni Desk Vacuums in the past, and the Desktop Digger Paperweight should go nicely with that […]

Imagine this. A piece of paper on your desk feels a breeze and tries to take off to parts unknown, only to be halted by the Hobbit Gandalf Paperweight shouting defiantly, “You shall not pass!” Sure, I know that reference is from the other set […]